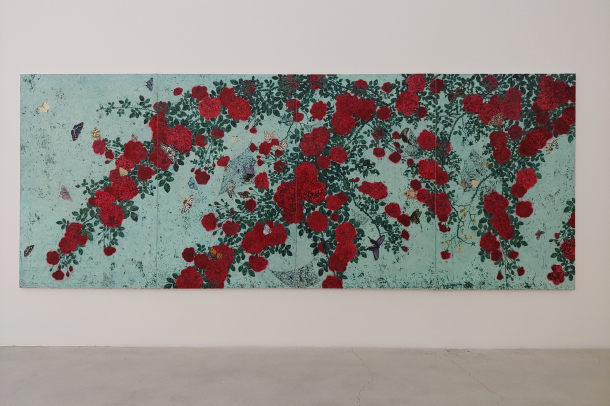 Artist Sungsic Moon’s international debut is unlikely to be matched for years to come in Korea. At the ripe age of just 25, he debuted as the youngest participant at the Venice Biennale for the Korean Pavilion in 2005.

Moon’s unique illustrations and pencil drawings won over many. His style is just the right hybrid of simplicity and detail that conjures up a magical mood to scenes we often see in our own daily lives.

Moon attributes his sources of inspiration to observation, something he says he “does naturally on a daily basis,” not because he has to. That inspiration and the overall ideas behind his works may remain the same, but his latest solo exhibition at Kukje Gallery, central Seoul, is nothing that you would have expected from him. This new chapter of his art exhibits his adventure to finding his own style, with more colors and less basis on realistic forms, and questions what “painting” means not just for him, but in the context of all humankind’s history.

This is Moon’s first solo exhibition at the Kukje Gallery in eight years, and showcases the major transition in his style. Titled “Beautiful. Strange. Dirty.,” the exhibition shows some 150 works created in the last few years while he was exploring how he could “bring the gap between drawing and painting closer together,” according to the artist.

“Since about two years ago, I have been rethinking the way I create my work,” Moon said to the local press on Thursday prior to the opening of the exhibition. “For me, I felt like I could be very detailed and free while I was drawing, but painting almost felt tormenting. It took away the expression from my work, and all I was left with was just a bunch of explanations. I know that there’s some sort of meaning there, but I had to find a way to reconcile those two.”

After experimenting with various mediums and styles, he found the answer by bidding farewell to his pencil. Instead of monochrome drawings, Moon began to incorporate a new technique of scratching into half-dried paint, leaving a unique rigid texture on the canvas. He also drew inspiration from the stylistic format from Joseon Era (1392-1910) paintings that translate the three-dimensional world into a two-dimensional field - resulting in “Attraction” (2017), a simple painting of purple roses and a blue hand. Then followed works like two paintings titled “Just Life” (2018-2019), red flowers against a blue backdrop and pink flowers against a yellow background, as well as the smaller “Just Life” series that was created between 2017 and 2019. 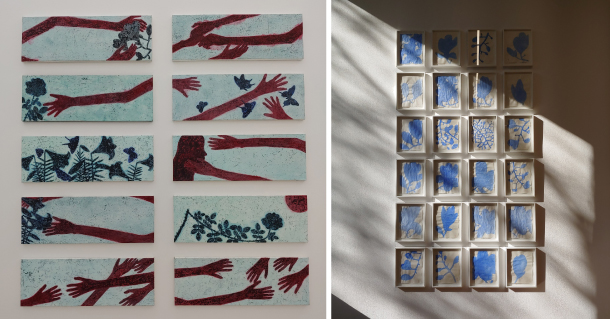 Sungsic Moon’s new work “Attraction” (2019), left, uses the image of people reaching their hands out to their families after they had been separated from each other by the Korean War (1950-53). “Water Sculpture” (2019), right, is based on the notion that we are all made up of and rely on water for life. [YOON SO-YEON]

“I’ve changed from when I was younger - even though I’m still young - but my ideas and observations haven’t,” he said. “So I could have drawn anything else, but the reason I particularly concentrated on flowers is because I felt that the human species was connected from the primeval times, bridged by the fact we have always been attracted to flowers. I used to plant and buy trees every now and then two years ago, and that made me think, why? Why do I like flowers? Why do we give each other flowers? Why have we liked flowers from so many years ago?”

With those questions in mind, the paintings take on another level of meaning. Within the two-dimensional visual field on the canvas, there are butterflies and birds flying around, that are “all doing the things they want to do in their own ways” according to the artist.

“Flowers bloom to reproduce and they wait for butterflies to come. Butterflies are attracted to the smell and they feed off them. The insects and birds chase each other, and it’s all part of a large world where they’re all doing the things they do in their very own moments. It’s capturing all of that in one scene,” Moon said.

Apart from the paintings using his newly-found technique, Moon has other works he either created during his experiments, such as his homage to Van Gogh called “The Starry Night” (2016), for which he used gouache on paper, and a single-color painting series “Water Sculpture” (2019) and “Humane, All Too Humane” (2019). For “Water Sculpture,” he got the idea from the fact that humans are just like insects and plants in the sense that we are all made up of water and in essence we are the same. For “Humane, All Too Humane,” he googled the word “porn” and painted the images he got from the search engine.

“I think as an artist, the will to draw and paint something is very complicated,” he said. “Sometimes I do it because I have something to say, but sometimes I do it just because it’s pretty or cool. And sometimes, I do it because I simply miss that scene […] It took me a while to get out of my own head, that it’s not contemporary art if not serious. I think for me to continue to paint, it needs to be a part of my life and not use up my energy. If I can tell myself that this is enough, then I can keep doing it.”