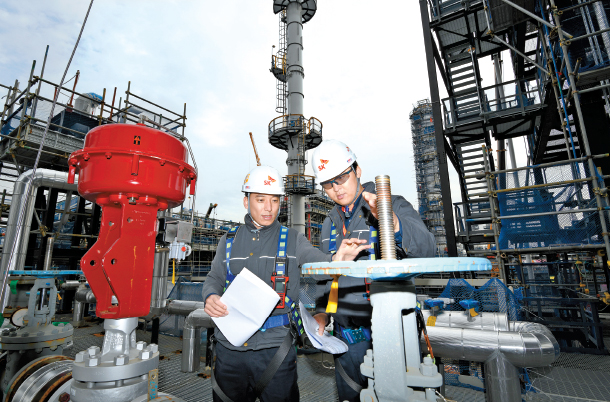 ULSAN - Jangsaengpo train station in Ulsan was once the center of Korea’s fuel network, built during the Korean War (1950-53) to distribute oil imports to army units nationwide. Today, it is the site of a massive, almost-completed construction project. A facility is being built that will produce the eco-friendly marine fuel that will be required for all ships globally from Jan. 1.

Being developed by SK Energy, the vacuum residue desulfurization (VRDS) unit is capable of desulfurizing bunker fuel to produce low-sulfur fuel with a sulfur content of 0.5 percent. The unit will be part of SK’s existing oil refinery plant.

“Once the unit starts operation, we expect to generate profit next year of 200 billion won ($169 million) on a conservative outlook or as much as 300 billion won depending on the market situation,” Lee Duk-hwan, project leader of SK Energy’s optimization operation office, told local reporters on Wednesday at SK Energy’s complex in Ulsan.

Behind the construction of SK Energy’s VRDS unit is a new rule that goes into effect next month. Under regulations created by the International Maritime Organization (IMO), a United Nations body overseeing international shipping, vessels have to use marine fuel with a sulfur content of no more than 0.5 percent from January 2020, a major change from the current limit of 3.5 percent.

This makes it impossible to use bunker fuel, the dominant energy source for ships. It has an average sulfur content of around 2.7 percent.

SK Energy started construction of the VRDS plant in November 2017. The original target for completion was March 2020, but the company managed to move this up to January, in time for the implementation of the new sulfur cap.

On Wednesday, the VRDS construction site in Ulsan already had its massive tanks, reactors and fractionating towers fully installed on the 82,600-square-meter plot of land. Workers with safety helmets and the scaffolding were the only indictors that some tasks remain.

“We’re 100 percent done in engineering and facility procurement; and in construction, we’re about 95 percent through,” said Moon Sang-pil, a senior executive who heads SK Energy’s process innovation office. “The remaining 5 percent is mostly about completing meters and insulation. These facilities run at very high pressure and heat. Any accident can be dangerous, so final examinations are very important.”

Pipe installation connecting eight reactors and other parts of the complex is also in its final stage. These reactors are where the high-sulfur fuel oil is mixed with hydrogen to produce low-sulfur fuel. The VRDS unit has a total of 240 kilometers (149 miles) of pipes connecting these facilities.

Once the construction is finished in January, SK Energy’s VRDS unit will start mass production in March after a two-month test run. The unit will have the capacity to produce 34,000 barrels of low-sulfur fuel oil and 60,000 barrels of marine gas oil per day. At the moment, SK Energy produces neither.

For oil companies facing risks in terms of international oil prices and slowing global trade, the IMO 2020 sulfur cap is an opportunity as it creates new demand for greener marine fuel. In marketing, the company plans to join forces with SK Trading International, which does business in off-shore oil blending - another way to produce low-sulfur fuel - and already has long-term supply contracts for the product with 18 shippers.

But with a month left until implementation, it remains to be seen how much the new limit will actually boost demand for greener marine fuel, which from the shipper’s perspective is a much costlier option compared to bunker fuel. Instead of changing fuel, shippers also have the option of installing scrubbers to their ships - a device that allows shipping lines to use regular bunker fuel by removing sulfur from emissions.

“The general market estimate for scrubber-installed ships in 2020 is 3,000. This may build up, but according to what we know so far, there are issues - scrubber demand shot up so fast and some of the products installed so far showed low reliability,” said Lee.

“There are also companies that hesitate due to cost issues; and even if they do, the installment takes time. The number of scrubber-installed ships is unlikely to increase fast.”

Meritz Securities Analyst Rho Woo-ho predicted in a Thursday report that the IMO 2020’s actual effect will only become visible around March.

“The increase rate of compliance is linked to the supply of low-sulfur fuel oil by port, and at the moment, the penalties imposed on shippers that do not abide by the rule is unclear,” Rho added.