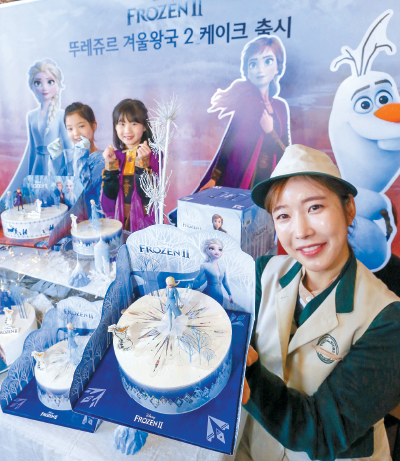 Every year, cafes, bakeries and retailers roll out exclusive offerings in December to entice consumers looking for a way to celebrate the holidays.

This year is no exception.

The white cakes are decorated with figurines of Elsa the Snow Queen and her sister Anna, as well as castle and tree designs. Cherry chocolate and blueberry are offered.

The company uses the movie to target children as well as adults. Frozen 2 hit theaters on Nov. 21, and 7.6 million tickets had been sold in Korea as of Saturday.

The cakes are big enough to be used at “school arts festivals and year-end parties,” said CJ Foodville in a statement last week. They are priced at 30,000 won ($27) each.

The cakes are available in strawberry and chocolate. A version with golden panettone, an Italian type of sweet bread loaf, will offered between Dec. 19 and Dec. 31, while the rest are available starting on Thursday.

“For this Christmas, we introduced cakes for single-person households and cakes of various sizes and prices,” said a spokesperson for Pascucci.

Starbucks started selling Christmas cakes today. Its theme is eco-friendly. Reservations can be made until Dec. 16, and the cakes can be collected from Dec. 20 through Christmas day.

Starbucks is offering five seasonal cakes with a focus on strawberry and chocolate. The company said it will only accept reservations via mobile app.

Paper reservations, which were used last year, will not be accepted this year as Starbucks works to support the environment.

Cake buyers are given two free drink coupons and will receive a party package, which includes a Christmas tree garland and ornaments and candles.

Homeplus on Sunday said that it has started accepting reservations for seven of its new seasonal cakes, including tiramisu, cheese and sweet potato cakes.