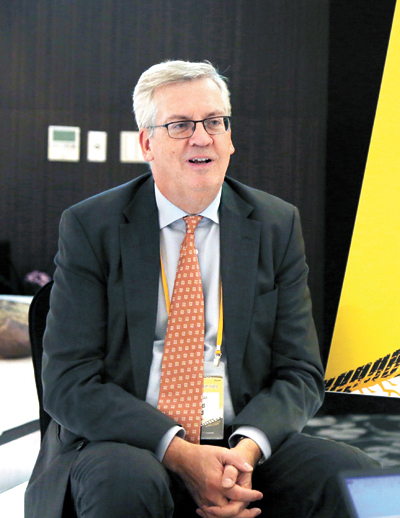 The self-driving car will take years to develop to the point of being fully autonomous, and the auto business is in need of a “reality check” on what the technology will be able to do and when, according to an industry leader.

Despite all the investment and the endless stream of announcements - with Teslas changing lanes and maintaining speed in traffic on their own, and Elon Musk, Tesla’s CEO, saying that human intervention could make his cars less safe - it is likely that self-driving achievements will be remarkably modest for years to come.

David Ward, secretary general of the London-based Global New Car Assessment Programme (NCAP), believes it’s much too early for drivers to take that leap of faith and trust cars to drive themselves.

“I think we need to have a big reality check about the safety dividend coming from autonomous vehicles,” said the car safety expert in an interview with the Korea JoongAng Daily. “We simply don’t know if the net effect of autonomous vehicles in terms of safety will even be positive.”

Ward cautioned that the promises of safety from self-driving cars are overblown. He made the comments during his visit to Seoul for the Korean NCAP’s (KNCAP) 20th anniversary event hosted by the Ministry of Land, Infrastructure and Transport at the InterContinental Seoul COEX on Nov. 14.

“There are nearly 1.3 billion motor vehicles on the planet, and they typically stay in use for up to 20 years,” explained Ward, who has worked with NCAP for 25 years and also helped found the Euro NCAP. You’re going to have “a considerable amount of interaction between autonomous vehicles, non-autonomous vehicles and even other types such as motorcycles.”

“In some emerging markets, there are extremely diverse road conditions,” he said. “Ninety percent of 1.3 million road deaths a year are in developing countries.

“The idea that autonomous vehicles are going to solve all of that any time soon is simply fanciful. It’s not realistic.”

While automakers have rushed to harness the technology - Hyundai Motor Group aims to commercialize fully self-driving cars by 2030 - Ward believes such targets are too optimistic.

“Autonomous vehicles - when they arrive - will probably come in high-income countries with already the safest roads and also in very controlled conditions,” predicted the Global NCAP chief. “I don’t think so much in passenger vehicles, but in fleet vehicles such as commuter buses that do a fixed route.”

“I’m not a skeptic about the technology and the end destination, but it will be many decades before we can say that this is a safety gain,” said Ward, also referencing a fatal crash last year in a Tesla on Autopilot. “Let’s not put the cart before the horse but max out what works now.”

The industry veteran called on automakers to focus on the basics to ensure safety, like including electronic stability control (ESC) systems which prevent vehicles from skidding on all vehicles.

“In a way, it’s kind of a boring old technology for engineers,” he noted. But, “we know that ESC can avoid 35 to 40 percent of crashes from skidding off the road. It’s still only equipped in about 80 percent of new models worldwide.”

“What we want is to accelerate penetration of ESC to the maximum by 2030,” he continued, outlining the car safety program’s goals. “On top of that, there are the various forms of autonomous braking, and those systems also have considerable safety benefits.”

“We are nowhere near fully exploiting all those benefits.”

He added that in terms of regulations, governments, especially in less mature auto markets, should focus more on the tried-and-tested technology such as ESC and the anti-lock braking system than committing to self-driving cars.

Ward highlighted the role of NCAP in keeping automakers and governments in check in terms of safety.

“The NCAP effect is to turbocharge safety above the minimum regulatory requirements,” he explained.

NCAP has conducted extensive vehicle safety testing. It was first created in the United States in 1979 and has expanded globally, to Korea in 1999 and Latin America in 2010.

“The best-performing vehicles now on sale in Latin America had stimulus come from Latin NCAP,” he said, highlighting the best-selling vehicle in Brazil - the subcompact Chevrolet Onix - used to be a zero-star car but now holds the full five stars.

“In Korea, they didn’t feel that regulations alone would do enough for the growing vehicle fleet,” he said. “That’s why they wanted the Korean NCAP to be the catalyst for change.

“The creation of the Korean NCAP was very important because it was the first [one] that was outside of the traditional so-called mature automotive markets,” said Ward.

KNCAP has progressed over the past two decades in parallel with Korea’s auto industry. It has rated 175 models so far, and the organization says that there were 28 percent fewer accident injuries for vehicles that received its assessment compared to those that did not.

Ward, who also serves as the president of the Towards Zero Foundation, a road safety organization, is also working toward intergovernmental efforts to halve road deaths by 2030.

“If all governments are involved, we could get that success,” he said, arguing that the auto sector should have an attitude toward safety like the aviation industry.

“We don’t seem to apply that on our roads. There’s a sort of implicit tolerance of a high level of death and injury,” he noted.

“A combination of safer vehicle infrastructure and vehicles - if all of these interactions worked better, we know that there would be a much more positive outcome.”