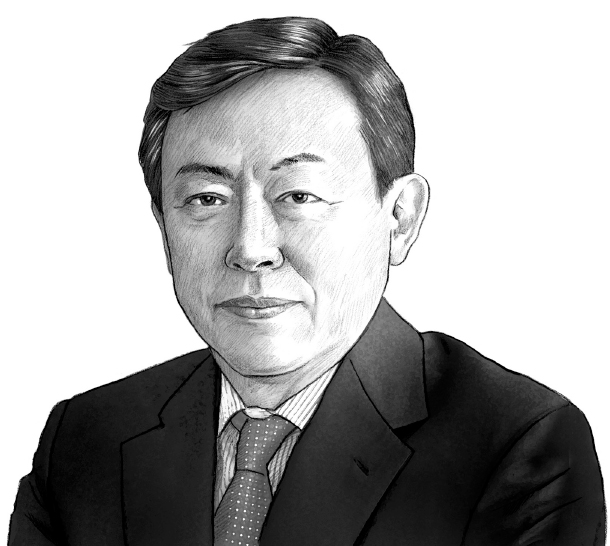 “This was the first time I ever received this kind of letter during an executive-level meeting, so I became very nervous,” one participant said.

While the letter came from Hwang, virtually all CEOs at the meeting knew something at once; the letter expressed the sentiments of Lotte Group Chairman Shin Dong-bin. It was also quite ominous, with words like threat, change, opportunity and survival, and was a call to arms of sorts, saying that from now on, the company would operate under emergency conditions.

The letter, which emphasized that survival isn’t guaranteed even if everyone works hard, signaled that Shin was exercising active, aggressive and frontline management of the group.

Since the letter was sent, Shin has noticeably involved himself more with the group’s business initiatives and meetings. He often walks into executive-level meetings and corrects the mistakes of others while personally making announcements of major corporate activities, a sharp contrast to his previous style of being more of a listener than a talker.

Four years of hardship for the group and the chairman seem to have changed the leader, industry sources say.

A protracted disputed with brother Shin Dong-joo, the eldest son of Lotte founder Shin Kyuk-ho and former vice chairman of Lotte Holdings, began in 2015. Then came investigations by prospectors the following year.

This was just the beginning.

Before these trials, Lotte Group wasn’t known for being the most outgoing. Founder Shin Kyuk-ho rarely went out in public. He rarely agreed to interviews and was hardly ever seen at industry events.

Shin Dong-bin, his son, followed in his father’s footsteps, but after four difficult years, he seems to have changed.

Uncertainty for Shin Dong-bin was greatly reduced after the Supreme Court upheld a lower court ruling to allow him to stay out of jail. He had been sentenced to two years and six months in prison.

The conglomerate was greeted with more positive news on Oct. 30, the day the Lotte REIT was listed on the Korea Exchange as the group secured 1 trillion won from the listing. The entity owns Lotte Shopping’s securitized real estate assets, including department stores, discount stores and factory outlets.

But that was the same day the Lotte Group announced the state of emergency, as it was projected that this year’s operating profits for Lotte’s retail and chemical companies would be half of what they were in 2018.

Since January this year, Shin has often been spotted in public monitoring the group’s business activities. Even on days off, he stops by business sites and takes on-site reports from the staff. He has also barged into Lotte-owned factories without advance notice and visited new business sites in Seoul during the weekends.

These activities became ever more apparent after the emergency conditions letter was sent to the executives.

Shin pointed out that the group needs to predict how markets will change over the next five and 10 years and prepare with a clear vision and detailed strategies. He asked CEOs to prepare battle plans against competitors that meet market and customer changes, demanding them make presentations on the subject.

Six months later, during an “Internal IR” session held on the last day of the regular CEO-level meeting, 58 CEOs and 150 executives presented their analyses and targets to Shin. Some were heavily criticized by the Lotte Group chairman on the spot.

“Some CEOs were persistently asked about matters that would usually be overlooked,” a source from a Lotte affiliate said.

During the session, Shin criticized the conservative strategies of some companies, saying “opportunities come when exerting strength in difficulties.”

Some industry experts believe that Shin was overly critical and harsh toward CEOs as he was in the process of solidifying his leadership of the Lotte Group.

“Lotte Group couldn’t properly react to the rising power of e-commerce, and its business in China essentially failed while Shin was in prison for being involved in the presidential scandal,” said Suh Yong-gu, a professor at Sookmyung Women’s University’s business school.

“Shin diagnosed that his leadership was damaged and made the moves to seize his control of Lotte Group after owner risk had cleared.” 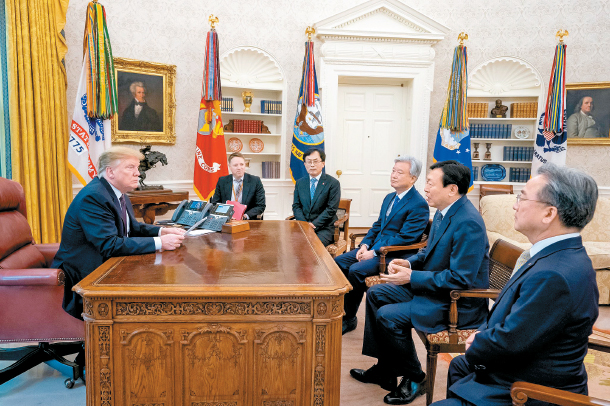 Lotte Group Chairman Shin Dong-bin meets with U.S. President Donald Trump at the White House in May. Shin is the only head of a Korean conglomerate to be invited to the White House. [LOTTE GROUP]

In September, quite a show was put on in Tokyo.

To explain Lotte Chemical’s planned acquisition of Hitachi Chemical, Shin took the stage himself. This breaks with convention, in which Hwang would normally have been the one to make the presentation.

Buying Hitachi Chemical, a subsidiary of Hitachi, could be the last piece of the puzzle for Lotte Chemical, as the Japanese company already has high-value-added electronic material products.

Hitachi Chemical has between 30 and 40 percent of the global market for epoxy molding compound, which acts as a shock absorber for anode materials and semiconductor chips, two major parts in electric car batteries. And for that reason, Lotte Group vowed to make the 8-trillion-won deal happen.

“The case shows how much of an attachment he had in pushing through the project,” a Lotte Group spokesperson said. “Lotte Chemical’s business development team is always writing reports reviewing chemical companies in the United States and Europe.”

Although the deal eventually fell through due to escalating tensions between Korea and Japan, the move signified that Lotte Group would focus on chemical-related assets.

The top executives for Lotte Group are from Honam Petrochemical, the former name for Lotte Chemical, and not coincidentally the chemical business is the area of focus for the group.

Honam Petrochemical was the first workplace in Lotte Group for Shin in 1990, where he met now-Lotte Corporation Vice Chairman Hwang Kag-gyu and Lotte Chemical President Kim Gyo-hyun. As the group is controlled by chemical industry insiders, Lotte has been continuously searching for opportunities to acquire specialty chemical businesses.

Shin, in particular, demonstrated his distinct management style by pushing through projects that he believed in despite negative opinions from others. Under his direction, the conglomerate has always eyed investment opportunities in the United States.

In 2016, the Lotte Group attempted to acquire Axiall, now known as Westlake Chemical. But as prosecutors were investigating Shin and the conglomerate in regard to the Park Geun-hye scandal, Lotte Group backed out of the race near the end.

Axiall’s market capitalization has more than doubled since then.

Earlier this year, Lotte Chemical completed the construction of a $3.1-billion ethylene plant at Lake Charles, Louisiana. At 1 million square meters (247 acres) in size, the complex has an ethane cracker that can produce 1 million tons of ethylene from shale gas per year and an ethylene glycol factory with a capacity of 700,000 tons a year.

Lotte Chemical jumped into shale gas-based businesses in late 2015 and started constructing the complex in June 2016 after establishing a task force dedicated to researching the business since 2012.

The company’s decision was called into question when oil prices fell, but Lotte Chemical continued on with the investment while others remained doubtful.

And when extraction costs for shale gas fell later, Lotte started attracting positive reviews on its ventures in the business.

What was seen as a folly in 2012 is now viewed as a good business decision.

“Lotte Group is the most overseas-oriented retail company, even when compared with duty-free stores, hotels and retail chains,” said Cho Dong-geun, an economics professor at Myongji University.

“Shin probably pushed for diversifying the company portfolio by increasing the proportion of the heavy chemical business, which is quite different from the traditional retail sector.”

Cho added that Lotte Group has been seeking to minimize business losses by focusing on two pillars - retail and chemical - to offset the other’s loss in times of economic uncertainty.

The last piece of the puzzle

As the group works to clean up its shareholding structure and improve its managerial transparency, getting Hotel Lotte listed on the Korea Exchange remains a key task.

Hotel Lotte, which owns significant equity stakes in Lotte Corporation and in Lotte Shopping, is seen being merged with Lotte Corporation to normalize shareholdings and to get the group closer to achieving a true holding company structure.

Lotte Group ultimately wants to have a solid, non-circular group structure with Lotte Corporation at the top. Lotte Corporation was established in October 2017 by merging the investment divisions of Lotte Shopping, Lotte Confectionery, Lotte Chilsung Beverage and Lotte Food. The establishment was the first step taken toward making the control of the entities within the group more transparent.

The number of circular shareholdings has dropped, and Shin has solidified his control over the company.

Lotte’s Japanese companies and the Lotte Holdings Japanese parent company have almost total control over Hotel Lotte. When Hotel Lotte becomes listed, Shin will be able to reduce the influence of the Japanese interests.

This will lessen circular shareholdings within the group and allow Shin to solidify his control over the conglomerate against his elder brother.

The listing also suggests that the group will be abandoning its traditional conservative corporate culture. The conglomerate listed Lotte Data Communication on the exchange in July 2018, the first time in 12 years for a Lotte-related company to be listed.

And ahead of its listing, Lotte Corporation sold all of its securities-related affiliates.

Under the law, a holding company cannot own shares in securities or insurance companies.

Current attitudes greatly contrast those of just over a decade ago, when the group was divided over the listing of Lotte Shopping. Some did not think it made sense to sell shares to the public if the group had enough cash on hand.

“Shin’s determination is apparent from cutting the group’s business in China loose at the right time when losses were ballooning and when making bold investments in a totally different field,” said Kim Tae-gi, an economics professor at Dankook University.

“With a rock-solid group portfolio, the group should be creating synergy between affiliates of different areas for better market strength, which would aid in raising Lotte’s reputation in the global market.”

But others believe that it is too early to judge whether Shin’s decisions were right, as reshuffling businesses is common for companies in a worsening domestic economy.

“We still need more time to see if Lotte’s set of decisions to strengthen its global competitiveness and empower the B2B businesses for better earnings was right.”

Financial circles are focusing on what will happen next at Lotte Group, as a major human resources overhaul is expected.

The conglomerate is waiting for a second round of personnel moves under Shin’s leadership slated for later this year.

As Shin did not voice his opinion much in the first round, as he was only two months out of prison at the times, the upcoming human resources shift is going to be Shin’s first opportunity to show his true colors.