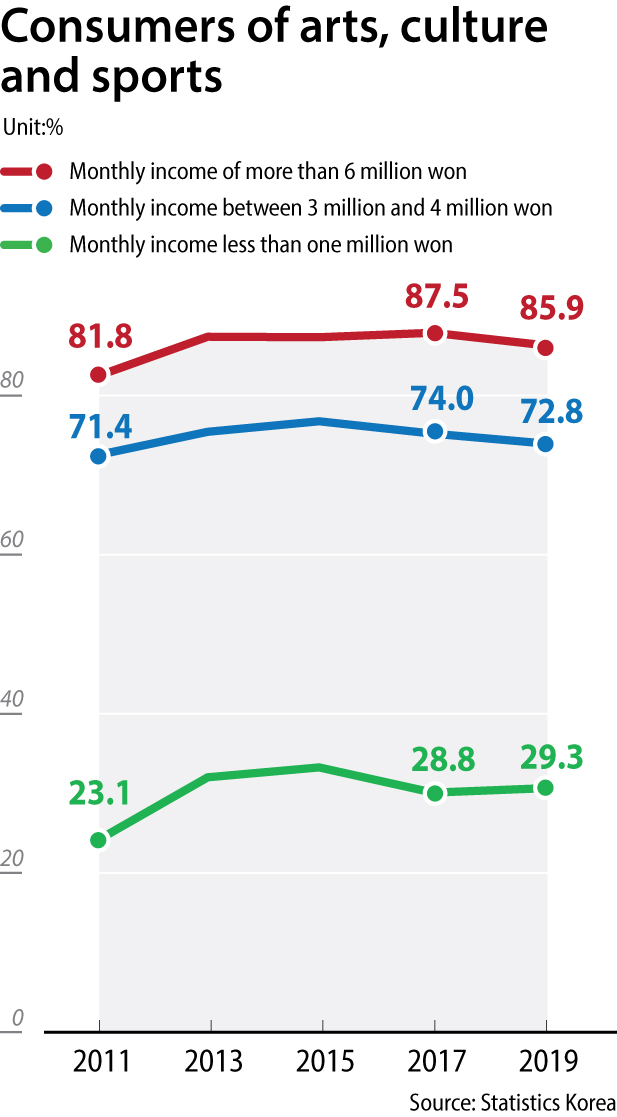 With money comes freedom, and Koreans are now at the stage where they are earning enough to do more than just work.

Gross national income is above $30,000 per person. That’s enough to more than cover the basics and have cash left over to go to the movies, attend exhibitions and while away the afternoon in an overpriced cafe.

But is culture really accessible for everybody?

To answer this question, the JoongAng Ilbo compared consumption by utilizing Statistics Korea data from its social study reports released between 2011 and 2019. The most recent edition of the report, which brings together survey results related to welfare, culture and consumption, was published in November.

It turns out that even people with low incomes are enjoying more culture than ever. Of those with incomes under 1 million won ($845) per month, 10.9 percent traveled overseas in the past year. That compares with just 5.9 percent in 2011. The proportion of those in that income group enjoying themselves at concerts, in movie theaters or at stadiums increased from 23.1 percent in 2011 to 29.3 percent this year.

Those in the under-1-million-won group also expressed satisfaction with their time off the clock. This year, 16.3 percent said they are happy, higher than 10.8 percent in 2011.

In other words, more people without deep pockets are able to enjoy themselves.

But the data show something else: The rich are enjoying themselves more as well. The fun gap remains wide and seems to be getting wider.

In the high-income bracket, the proportion of overseas travelers in the past year hit 51.9 percent, jumping from 39.9 percent eight years ago. While one out of 10 lower-income Koreans traveled abroad, one out of two high-income earners did so this year.

The pattern holds across the board.

In terms of arts and sports, 85.9 percent of high-income earners watched, visited or partook, a slight increase from 81.8 percent in 2011. That is in stark contrast to the low-income category, in which seven of 10 did not participate in cultural activities of this sort, though the ratio did rise from 23.1 percent in 2011 to 29.3 percent this year.

But that was mainly because fewer people are reading. The shift to video is apparent across the board.

Experts note that a gap in cultural experiences and consumption mirrors income polarization.

“With low-cost carriers and free exhibitions and concerts, people with lower incomes today can enjoy a wider range of leisure services and content. But with widening income polarization, their consumption is not catching up,” said Kim Tae-gi, an economics professor at Dankook University. “This is why we need a directional shift in economic policy.”