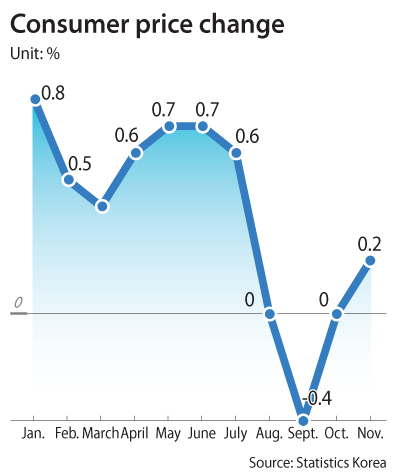 Consumer prices rose for the first time in four months in November, snapping a short deflationary streak but not enough to end concerns about the general trend downward.

According to Statistics Korea on Monday, consumer prices in November were up 0.2 percent compared to the previous year. It was the 11th consecutive reading below 1 percent, the longest period of weak price gains since 1999.

The slight strengthening was attributed mainly to high utility bills. Declines in the prices of agricultural goods and petroleum products slowed, which also helped in achieving a positive reading.

“Typhoons and heavy autumn rainfall have resulted in disappointing harvests, which helped slow the price declines of agricultural goods, like Napa cabbages, radishes and cucumbers,” said Lee Doo-won, the agency’s director of price statistics. “There will be no more negative inflation.”

In November, the prices of agricultural goods declined 2.7 percent compared to a year ago, which is slower than the 8.2 percent drop in September and the 3.8 percent fall in October.

A slowing in the decline of petroleum prices helped as well.

The price of services was up 1.6 percent, while utility bills rose 1.5 percent.

The Ministry of Economy and Finance said that the Korea Sales Festa, which ran from Nov. 2 and Nov. 22, contributed to the decline in the prices of manufactured goods.

It added that policy and the supply situation will ease the risk of deflation and said that the rate of consumer price increases should be about 0.5 percent by the end of the year.

Finance Minister Hong Nam-ki expressed his optimism about economic sentiment on his Facebook page on Monday.

“The industrial activities report released by Statistics Korea on Nov. 29 shows that while sales when compared to the previous month have shrunk, it is consistently on the rise when compared to the previous year,” Minister Hong posted. “The economy is truly about sentiment. If we say ‘times are difficult’ we could actually face a self-fulfilling crisis. We need to have more confidence.”

Concerns about the possibility of deflation remain as core inflation, which excludes agriculture products and petroleum, remains at the lowest level in two decades. Last month, core consumer prices were up 0.6 percent compared to a year earlier, down from a 0.8 percent increase in October and unchanged from September.