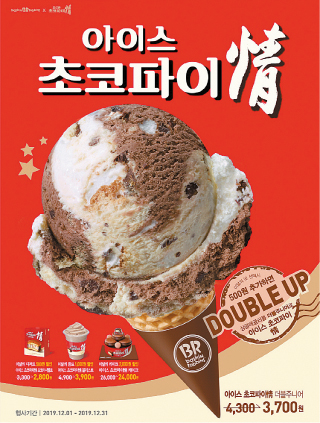 Early reports from the field suggest the mix is selling well, with commercial-sized ice cream tubs near empty within hours.

The concoction is the joint effort of the ice cream chain and Orion, maker of the legendary snack.

Introduced in 1974 and one of Korea’s oldest confections, a Choco Pie is made with sponge cake, marshmallow and chocolate.

The Baskin Robbins special will only be available during the month of December.

It is called “Ice Choco Pie Jeong” and will have chocolate and vanilla ice cream with marshmallows, crushed Choco Pie cake and chocolate chips.

This is just the beginning of the collaboration. The companies have developed three other offerings. “Choco Pie Jeong Blast” is a cold beverage that blends the new ice cream with an actual Orion Choco Pie. There will also be a cake with five ice cream flavors, including the December release, Choco Pie cake and macarons.

Last on the list is an ice cream sandwich that looks like a large, cold version of a Choco Pie, with marshmallow and chocolate ice cream between sponge cakes, all covered by a thin chocolate layer.

The project with Orion is the latest among Baskin Robbins’ collaborative releases.

In May, it sold “Ice Jollypong.” The special edition referenced the 47-year-old Jolly Pong snack from Crown Confectionery.

The franchise’s portfolio of ice cream combinations made with famous flavors includes those with Hershey’s macadamia chocolate, Oreo cookies and Bacchus, a classic energy drink.

The product is a win for Orion as well. Confectionery classics face the tricky task of regularly renewing their image for young consumers while maintaining their legacy identity.

“So far, we’ve released a rice cake version, a banana flavor and a desert gourmet Choco Pie - we’re pushing efforts to expand our lineup within the brand to approach consumers in a fresh but friendly way,” said an Orion spokesman.