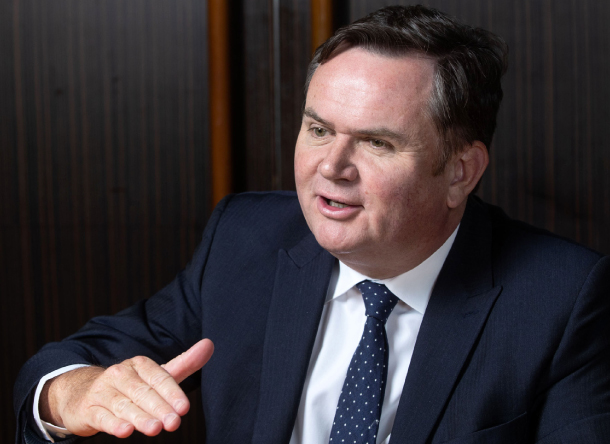 As the population ages and chronic diseases become more common, GE Healthcare believes those trends provide a chance to expand its business and take the lead in certain fields within the global biopharmaceutical industry.

As more and more people tend to rely on advanced diagnostics methods like magnetic resonance imaging (MRI) and computed tomography, the U.S. company thinks that is an opportunity for its pharmaceutical diagnostics business, which is in charge of developing and selling contrast agents, to prosper.

Clariscan, which has already been widely successful in Europe and the Asia-Pacific region, has helped GE Healthcare to solidify its lead in the global pharmaceutical diagnostics market. GE Healthcare sells the most doses of contrast agents per year in the world and has stayed at the top of the market.

With the latest FDA approval, O’Neill believes the company could use growing momentum for his business’s products to expand the role of contrast agents and solidify its lead in the sector.

“In today’s world, every country has the same challenges; the ones we see in Korea are exactly the same in other countries,” O’Neill said.

“There are more patients entering the health care system, and we are facing an aging population with more prevalence of chronic diseases.”

According to the company, the global contrast agent market is expected to grow 3 percent annually to reach $9 billion by 2021.

“Already, more than 90 million doses of our contrast agents are used per year, which means that three people are using GE Healthcare’s contrast agents every second,” O’Neill said, adding that between 1.5 million and 2 million people in Korea use its products per year.

“We are the No. 1 global player in the pharmaceutical diagnostics business with a very large supply chain and excellent products.”

Since first being commercialized in Europe in 2017, Clariscan has been given to more than 3 million patients worldwide, and the product was launched in Korea last year as one of the key strategic markets for the Asia-Pacific region.

“Korea is a very important market for us,” O’Neill said. “Korean health care itself has a lot of great leadership, and people are very interested in advanced research.”

“It’s always important for us to think ‘What’s the Korean state of mind?’ The answer to that is the global trend.”

While Korea is not one of the biggest markets in the world in terms of sales for GE Healthcare’s products, he said the country is still a sensitive one for the company for having advanced medical technologies and professionals.

“The Korean government recognized early on the importance of early diagnosis of Alzheimer’s disease, and that’s why we launched Vizamyl in Korea first among all Asian countries,” O’Neill said.

Vizamyl is an imaging agent from GE Healthcare that is often used to diagnose early-stage dementia. The Korean government launched a national campaign to grow related markets in preparation for dementia starting 2008.

And in marketing its contrast agents like Clariscan to key markets like Korea, O’Neill said ensuring the safety of its products as well as efficacy has been the most important task for the pharmaceutical diagnostics business.

Contrast agents, which are rated based on how well they can make body parts visible, are known to sometimes carry adverse effects like nausea, headaches, rashes and pain on the injection site. Although extremely rare, the products could lead to life-threatening conditions like kidney failure, shock and cardiac arrest.

According to the Ministry of Health and Welfare, the number of adverse events from contrast agents steadily increased over the past five years to 21,000 in Korea last year, 33 of which turned out fatal.

“We have a very skilled, vigilant team monitoring any instance of side effects, and it collects the data from all around the world to share safe ways to use our contrast agents,” O’Neill said, even though he declined to go into details on what the adverse effects are for Clariscan.

“They are regulated products, which means they have to be administered with the lines of prescribing conditions. This is something we take incredibly seriously.”

As the company looks to strengthen its lead in the growing pharmaceutical diagnostics market, O’Neill says his business is hoping to gain a bigger footprint by providing personalized medicinal solutions.

“Medical errors are estimated to be the third leading cause of death,” he said. “That’s why we need precision health - health care that is integrated, efficient and personalized to each patient.”

He contends that just like how treatment options should be categorized more varyingly to support a wide range of patient needs, product lineups for contrast agents must also be expanded for more effective diagnosis for physicians and analysis for researchers.