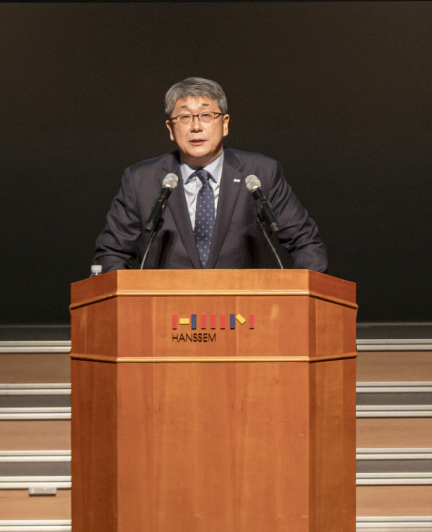 Kang Seung-soo, chairman and CEO of Hanssem, gives a speech at his inauguration ceremony held in Sangam-dong, western Seoul, on Monday. [HANSSEM]

The newly appointed chairman and CEO of Hanssem set the lofty goal of reaching 10 trillion won ($897 million) in domestic sales during his inauguration ceremony at the company’s office in Sangam-dong, western Seoul, on Monday.

Kang Seung-soo, who was promoted from vice president to CEO last month, said Hanssem aims to achieve 10 trillion won in sales and to branch out overseas. He did not specify a timeline for either goal.

“[Hanssem] will revolutionize to a high-efficiency and high-value business structure by adopting IT techniques in the home interior business and leading consumer lifestyles through design that goes beyond east and west,” said Kang at the ceremony.

“[I] will make Hanssem a creative corporation that takes challenges to achieve goals without fear of failure based on the business values of freedom and creativity.”

“Through the constitution of home interior space packages and online-offline distribution channels, [Hanssem] aims to achieve 10 trillion won in sales.” Kang said, adding that Hanssem will discover new growth engines such as the smart home.

“Based on the capacities we have built in Korea, we plan to branch out overseas with a localization strategy.”

Hanssem expects to achieve the whopping sales goal in between five to 10 years, according to a spokesperson for the company.

Its sales last year were a little under 2 trillion won.

Hanssem currently operates a business in China. It entered the market as a business-to-business supplier in the late 1990s and opened its first store in 2017. Hanssem’s overseas plan is to focus on the Chinese market for now, according to the spokesperson.

While thanking its partners, employees and shareholders, Kang said he will transform Hanssem into a company with a horizontal working culture where employees can fully demonstrate creativity.

After graduating from Seoul National University, Kang started working for Hanssem in 1995.

His core achievements include opening the Hanssem flagship store in 1997. He is seen to have played a major role in making Hanssem become the leading player in the furniture market.