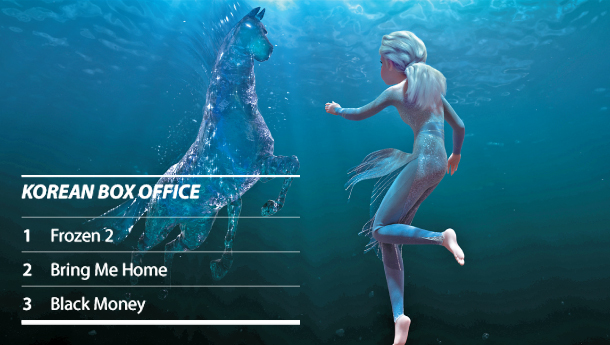 “Frozen 2” continues to rule the local box office, but the film has led to a few local controversies. [WALT DISNEY COMPANY KOREA]

The story of Elsa’s and Anna’s adventure into the unknown dominated the weekend box office for the second consecutive week, possibly setting the film up to break a record set by “Frozen,” (2014) when it reached the 10-million-ticket sales mark in just 46 days.

The Disney film drew 2.6 million people to theaters over the weekend through 2,368 screenings. In total, the film has sold over 8.5 million tickets in 11 days - 16 days earlier than when the first film had reached the same mark.

Meanwhile the popularity of the film has led to series of unexpected controversies: For one, due to the film’s dominance in Korean theaters, a local non-governmental organization, the Public Welfare Committee, filed a complaint to the Seoul Central District Prosecutors’ Office saying that the Disney film had monopolized local cinemas after taking up about 88 percent of the total screens in the country. The group’s argument is that Disney tends to reap huge profits in a short time, but during that time, it limits consumers’ choices and violates the law.

However, those who are against the idea argue that the screenings would be a form of social discrimination. They assert that it wouldn’t be fair for all children to be prohibited from cinemas due to the behavior of a few children.

“Bring Me Home” took the second place on its first weekend, drawing 292,000 moviegoers in 838 screens. The film signals actor Lee Young-ae’s return to theaters after a 14-year hiatus from the film industry.

The story revolves around Jung-yeon, a heartbroken mother who struggles to lead a normal life while searching for her son Yoon-su, who has been missing for six years. When she receives a call that there is a boy who has a similar physical description to her son, she rushes to Moonsan, a remote seaside village where the residents live off of profits made from tourists who come to enjoy fish. However, when she asks around for her son, she notices that people are avoiding answering her questions, and some even become hostile toward her. Without any sufficient leads, she plans to leave, but when she learns of children living at a secluded property, she secretly returns, determined to get to the bottom of the secret in hopes to finally bringing her son home.

The film centers around Haley’s, played by Scodelario, and her father Dave’s survival from a pack of ferocious alligators who surround their home after a hurricane.

The film tells the story of Raphael, a successful sci-fi writer who gradually becomes distant from his wife, Olivia, who has sacrificed her career as a pianist to be to be with him. One day, in a novel that he is writing, Raphael decides to kill off the female character who he based off of Olivia. On the same night, he has a huge fight with Olivia, and when he wakes up next morning, he finds himself in a parallel world in which Olivia has never met him and he is a literature teacher. On the other hand, Olivia has become a star pianist. Desperate to return to the other world, Raphael must do everything he can to get Olivia to recognize him again.