Members of the Korea Down Syndrome Society, Mexican Embassy in Seoul and Ambassadors Spouses Association in Seoul pose together at the society’s headquarters in Nowon District, northern Seoul, on Aug. 29, after participating in an arts and crafts program they organized together. [EMBASSY OF MEXICO IN SEOUL]

The Xoloitzcuintle did it again.

A hairless breed of dog that originated from Mexico during pre-Columbian times, the Xoloitzcuintle has long been believed to be the guide for souls into the Mexican underworld, bridging the two worlds together.

But this time in Korea, the dog connected people across two nations through a project put forward by the Mexican Embassy in Seoul.

“’XICO in Korea: Gaining Hearts Across the Ocean’ was a binational simultaneous campaign to foster the knowledge of traditions of Mexico and Korea in both countries through the dog ‘Xico,’ a famous character of Mexican pop culture created by designer Cristina Pineda and based on the Xoloitzcuintle,” said Bruno Figueroa, ambassador of Mexico to Korea.

“The project was aimed at the general public but purposely targeted the youth and people with disabilities, including a Down syndrome community in Korea, usually set aside from public diplomacy activities.” 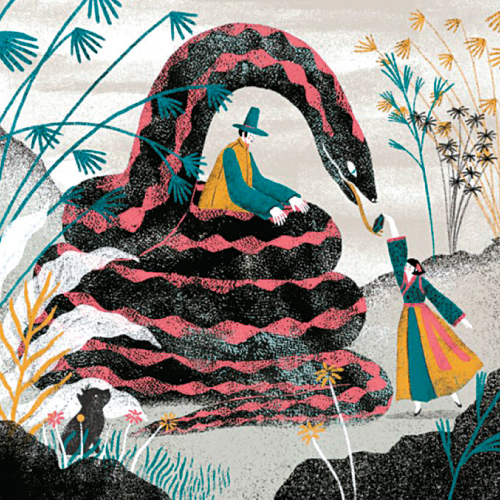 An illustration of a Korean folk story by Mexican artist Jimena Estibaliz, included in the book “Leyendas coreanas de Xico” (2019). [EMBASSY OF MEXICO IN SEOUL]

The yearlong Xico project was recognized by the Corps of Honorary Consuls in Korea, which along with the Korea JoongAng Daily presented Ambassador Figueroa with the Ambassador of Public Diplomacy Award on Monday.

“The Korea JoongAng Daily received records of public diplomacy efforts from embassies and conveyed our recommendations to the Corps of Honorary Consuls in Korea, who made the final decision for the award,” said Ryu Kwon-ha, CEO of the Korea JoongAng Daily at the Public Diplomacy Night hosted by the paper and the Chey Institute for Advanced Studies at the institute in southern Seoul on Monday.

“The finalist was selected based on the creativity of their public diplomacy projects and how they were able to engage with audiences in Korea, especially those that may have limited opportunities to work with embassies before.” 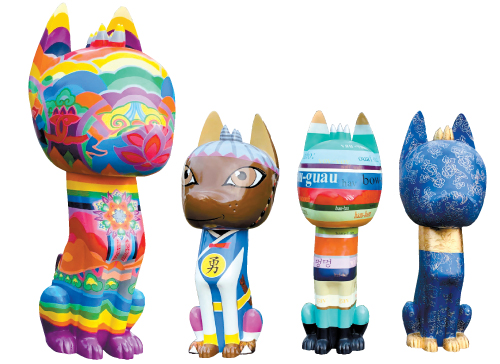 Statues of Xico, a character symbolizing the Xoloitzcuintle, that were created by Mexican designer Cristina Pineda, painted by Korean artists. [EMBASSY OF MEXICO IN SEOUL]

Working with the city governments of Mexico City and Seoul, the Ministry of Foreign Relations of Mexico, the Seoul Foundation for Arts and Culture and the Korea Down Syndrome Society, the Mexican Embassy in Seoul executed the project in three parts.

“It must be highlighted that the project promoted a low-cost collaborative artistic effort with high impact in both countries,” the Mexican Embassy in Seoul said in its statement.

The embassy hosted arts and crafts activities using Xico as a motif at the Korea Down Syndrome Society’s headquarters in Nowon District, northern Seoul, on Aug. 29. The event was supported by members of the Ambassadors Spouses Association in Seoul.

Members of the Korea Down Syndrome Society made masks using Xico as a motif and heard from the members of the embassy including Ambassador Figueroa and his wife Veronica Gonzalez Laporte about Mexico and the Xico project.

Gonzalez shared about her experiences in publishing a book on Korean folk stories and legends with a group of Mexican artists.

She published the book “Leyendas coreanas de Xico” (2019) as part of a collection of books by designer Cristina Pineda, which tells of stories and legends around the world including of the United States, Russia, Cuba and the Middle East and also uses Xico as a motif in the illustrations. 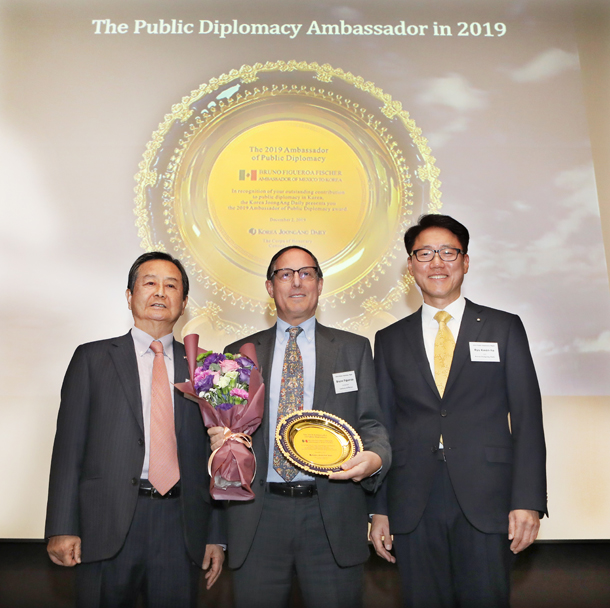 Ambassador of Mexico to Korea Bruno Figueroa, center, is presented with the 2019 Ambassador of Public Diplomacy Award by Yang In-mo, dean of the Corps of Honorary Consuls in Korea, left, and Ryu Kwon-ha, CEO of the Korea JoongAng Daily, right. [PARK SANG-MOON]

“I read books written about Korean folklore and selected stories that were not as much told even here in Korea,” Gonzalez told the Korea JoongAng Daily. “For instance the legends in Korea regarding how the country was born, such as the one about the bear and the tiger, are well known. I wanted to go deeper, to find legends that used to be told once but are today forgotten.”

Gonzalez is also an anthropologist, collaborator and translator for the Revista de la Universidad de Mexico.

Asked whether she found any similarities between legends in Korea and Mexico, she said, “Not really,” adding that she was not really expecting to find any.

“You don’t have to find similarities in these stories,” she said. “Otherwise you will not approach the stories as they were meant to be, or the countries as they are.”

The book brought together 25 Mexican artists to produce illustrations for 28 Korean folk stories published in the book.

“Because some of the artists have never been to Korea and were not familiar with these stories, it was a challenge for them,” she said. “But they learned about Korea and its ways and made their artistic interpretations through their work which you can find in the book.”

The Mexican Embassy also held storytelling sessions with the book with children aged between 6 and 12 at the Multiculture Museum of Korea in northern Seoul on Aug. 30. The participants also took part in a drawing contest.

As another section of the Xico project, the Mexican Embassy collaborated with the city government of Seoul and the Seoul Foundation for Arts and Culture to engage artists in Korea.

They held a contest for designs for four 2-meters-high (6.5-feet-high) sculptures of Xico from June to August. Four Korean artists made the finals, using designs that incorporated traditional Korean elements including those used in hanbok, or traditional Korean dress.

The four Xico sculptures newly designed by the artists were exhibited at Seoul Plaza from Aug. 31 to Sept. 1 as part of the Seoul city government’s Seoul Friendship Festival program and at the Cheonggyecheon Plaza from Sept. 2 to 14.

The sculptures will be on display at various venues in Seoul including the Oil Tank Culture Park in western Seoul. They will then be donated to the Latin American Latin American Cultural Center Museum in Goyang, Gyeonggi, the Mexican Garden at Suncheonman Bay National Garden in South Jeolla and the Multiculture Museum of Korea in northern Seoul, according to the embassy.