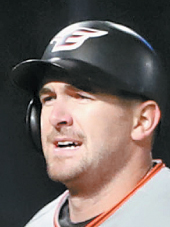 The Eagles said, in addition to Hoying’s hitting and base running, they also like his range and strong arm in the outfield. They added Hoying’s strong work ethic had a positive impact on the rest of the club, even though the Eagles stumbled to a ninth-place finish in the 10-team league.

Hoying’s signing completes the foreign player puzzle for the Eagles, who earlier re-signed two pitchers from the 2019 season, Warwick Saupold and Chad Bell.