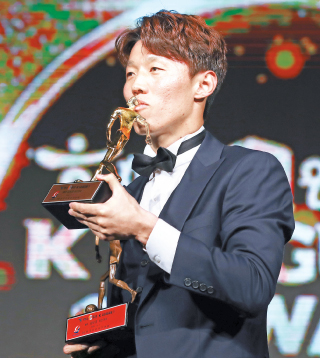 Kim Bo-kyung, a high-scoring Ulsan Hyundai FC midfielder, was voted the most valuable player (MVP) in the K League 1 on Monday.

Kim scored 42.03 points out of 100 in voting by head coaches, club captains and media, with Jeonbuk Hyundai Motors midfielder Moon Seon-min finishing second with 24.38 points. Cesinha of Daegu FC, who led all players with 25 offensive points from 15 goals and 10 assists, finished third with 22.80 points.

The first career MVP for Kim, a former Premier League player with Cardiff City, was a bittersweet moment, coming as it did a day after Ulsan blew an opportunity to win their first championship in 14 years.

Ulsan took a 79-76 lead over Jeonbuk Hyundai Motors into Sunday’s final match against Pohang Steelers. Ulsan only needed a draw for the title but ended up losing 4-1. Jeonbuk beat Gangwon FC 1-0 to finish with 79 points, tied with Ulsan. But Jeonbuk had the edge in the first tiebreaker, goals scored, by 72-71, to capture a record-tying seventh title.

The voting by the media, coaches and fellow players ended after Sunday’s matches, and Kim admitted he had given up hopes of winning the MVP after Ulsan’s collapse.

“I was able to win this because of sacrifices from my teammates,” Kim said after accepting the trophy. “I know our coach [Kim Do-hoon] said yesterday no one remembers who finished second. But we the players will remember it. We’ll try to learn from our mistake and get better next year. If we don’t try to improve after this, then this season will go down as a failure for us.”

This was Kim’s first season with Ulsan, following two seasons with Jeonbuk. Kim had never scored more than four goals in a K League season until this year.

But Kim is entering an offseason of uncertainty, as his loan deal from Japanese club Kashiwa Reysol to Ulsan Hyundai FC expired with the season’s conclusion last weekend.

After accepting the trophy for the top individual award in Korean pro football on Monday, Kim said nothing has been determined about his immediate future.

“I know I’ve reached a point where I have to make a decision,” the 30-year-old midfielder said. “As important as my own opinions are, I also have to speak with my agent and my team. Nothing concrete has taken place on that front.”

Kim had said before that his future destination would depend on whether Ulsan won the K League 1 championship this year. They blew a chance to capture their first title in 14 years on Sunday, losing to Pohang Steelers 4-1 in the season finale and allowing Jeonbuk Hyundai Motors to win their third straight championship with a 1-0 win over Gangwon FC.

Kim, who led all Korean players with 13 goals in 2019, said he received the MVP award with mixed emotions.

“I don’t know if I am really that much better than other MVP candidates,” Kim said of Moon Seon-min of Jeonbuk, Cesinha of Daegu FC and Wanderson of Pohang. “I won the MVP thanks to my teammates’ sacrifices. So if I don’t celebrate this award properly, then I wouldn’t be doing justice to those players. I am grateful but also sorry at the same time.”

Kim said while Ulsan’s collapse obviously hurt, that shouldn’t discourage him and other Ulsan players from trying to learn from their failure.

“If we give it all up and say to ourselves this is as far as we can go, then our fans will be really disappointed,” he said. “I think fans watch the K League because players keep battling over and over again. We should all try to take the next step from here.”

Kim said it was “a privilege” to have played with a contending club like Ulsan in 2019.

“I must say I’ve been very fortunate, and only a few players get to enjoy an opportunity like this,” Kim added. “I think I won the MVP because I competed on such a good club. Ulsan brought out the best in me.”