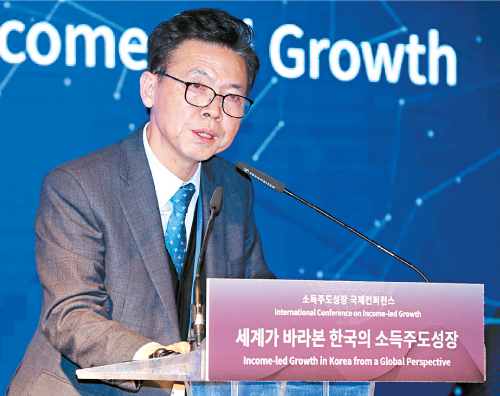 Hong Jang-pyo, chairman of the special committee on income-led growth, speaks at the committee’s conference held at Coex in Gangnam on Tuesday. [YONHAP]

Hong Jang-pyo, chairman of the special committee on income-led growth, said that despite its flaws, the current government’s income-led growth policies need to evolve by further strengthening their positive aspects while making improvements to certain areas and adjusting priorities based on real economic conditions.

“As with all policies, the government’s income-led growth and innovative growth policies are not complete,” Hong said during the committee’s conference held at Coex on Tuesday. “Policies need to evolve as they are adapted to actual economic conditions or the receptiveness on the part of economic agents.”

He said looking back on the two and a half years since the Moon Jae-in administration initiated the income-led growth policies, there have been some positive results, including a recovery in jobs, increases in employment rates and the narrowing of income gap shown in the third-quarter household survey.

“But there is still a long way to go,” Hong said. “More issues remain to be resolved. The most urgent tasks will be to respond to structural changes, such as changes in the industrial structure related to the restructuring of core manufacturing industries, demographic changes, such as an increase in the aging population, a decline in the young population, the reduction in jobs and new forms of employment arising as the fourth industrial revolution.”

Hong noted that there has been much controversy over income-led growth policy since the beginning of this administration and said he understands the worries.

“I could see how expectations over such a fresh, new approach were intersecting with concerns over the risks involved,” Hong said.

He said while there have been positive effects, such as solving structural problems regarding low growth and polarization, some have suffered from side effects, such as the sharp increase in the minimum wage in the last two years.

“However, while the path is new, we are hardly alone as we proceed on,” Hong said.

“The shift of the paradigm pursued by the Moon government’s income-led growth policy - that is, the reduction of polarization and imbalances, and the transition towards balanced growth - has become a key issue in global discussions of economic policy,” he added. “They form a direction pursued not only in Korea but in the policies of many other countries.”

Hong said neighboring countries, like Japan and China, are also pursuing a shift to an inclusive and balanced growth paradigm.

“It has already been two and a half years since the Moon Jae-in administration was launched,” Hong said. “The Moon government has been pursuing a shift in the current economic paradigm toward income-led growth, innovative growth and fair economy, under the vision of overcoming low growth and polarization and creating a people-centered economy,” Hong said.

“The first half of the Moon administration was a time to overcome the past and shift the policy paradigm toward the future, and the remaining half should bring people to realize a change in their lives,” he said. “It is also time to focus on structural reforms that change the constitution of the economy in the long term rather than focusing on short-term results.”

“The lack of equal opportunities fuel social discontent, stifle growth and have a real effect on how people live and how long they live,” Gurria said. “Inequalities are putting pressure on a squeezed middle class, who sees the cost of living rising while the quality of jobs decline with less security and stagnating wages for workers.”

He said the OECD is ready to build on the momentum of inclusive and innovative growth while making government effective and responsive.

The OECD is currently working on an “inclusive growth review of Korea,” the first country review on the issue from the international organization. It will be released in February.