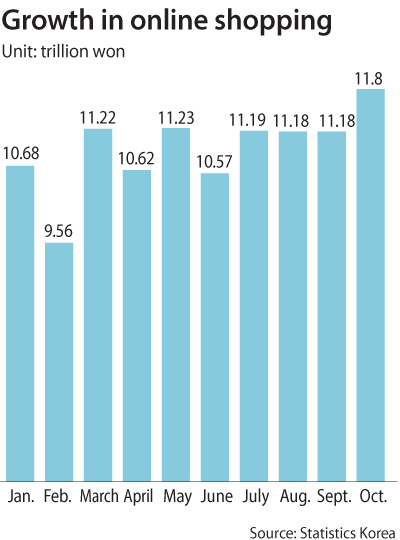 Online shopping volume hit an all-time high in October, and 2019 is on its way to a record.

Koreans bought 11.8 trillion won ($9.9 billion) of goods via the internet in October, up 17.3 percent from a year earlier, according to Statistics Korea on Tuesday. Their internet purchases in the first 10 months totaled 109.3 trillion won, 96 percent of the total for full-year 2018.

Mobile shopping is increasingly driving sales, with handset purchases now 65 percent of all purchases, up from 61.9 percent a year earlier. It is outpacing all internet sales, rising 23.2 percent from 6.2 trillion won a year ago.

More than 50 percent of consumer electronics, including computers and electronic goods, such as smartphones, were made through mobile shopping, while 63 percent of fashion item sales were completed via that channel.

A total of 74 percent of service purchases, such travel tickets, movies and leisure, and 93.8 percent of food services were made on mobile devices.

Food delivery was especially popular via mobile devices, with an 85 percent rise in orders made that way. Online orders for early-morning delivery are up 80 percent on handsets.

“The increasing consumption of delivery food and the growing preference for food products easily consumed by simply heating them up in microwaves are changing consumption,” said a Statistics Korea official.

The growing online shopping sales come at a time when there’s an increasing concern over consumers tightening their purse strings.

In a report released last week, the agency estimated consumer spending increased 2.1 percent in October compared to the same month a year ago.

Finance Minister Hong Nam-ki said this was a strong sign of consumer sentiment improving. However, when compared to the previous months, the growth in consumer spending has been slowing. Consumer spending rose 4.1 percent on year in August, slowed to 3.1 percent in September and further dropped to below 3 percent in October.