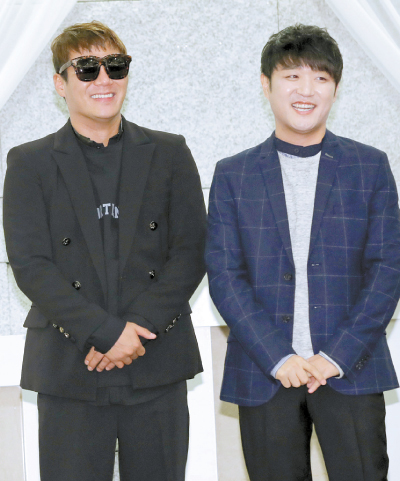 Ballad duo Vibe asked music distributors and streaming service platforms to get to the bottom of the ongoing streaming scandal through a statement released on Tuesday.

“On Nov. 24, we were faced with a troublesome situation due to an utterance from an artist,” Vibe said, referring to the Twitter post by singer Park Kyung through which he accused six Korean acts of sajaegi - the act of streaming music using multiple IDs to push songs up the music charts.

“Because the utterance was totally false, we thought at first that it was a mistake […] But the answer we got was that they could take the post down, but they could not apologize. Days later, that false rumor marked us with a dishonorable name.”

The duo claims that they have requested that all local music streaming outlets clear their name after reporting the necessary files to police, including Kakao M - operator of music chart Melon - Naver Music, Soribada, Bugs Music, DreamUs Company, Genie Music, The Ministry of Culture, Sports and Tourism, Korea Creative Content Agency and more.

“But above all, we ask for the distributors to verify the data we need for the investigation. We ask for the teams mentioned [by the post] to have access to the data, and for you to raise your voice to the public for this matter to come to light,” Vibe said.

“We swear on all of our music life to get to the bottom of this as both a victim of false rumor and seniors in the music scene.”

Park, a member of boy band Block B who is currently pursuing a solo career, accused six acts, including Vibe, of allegedly rigging online music charts by cheating the number of streams they had.

Although all six of the teams swore that they would take legal action against Park, many K-pop fans are siding with him, as they also turn a suspicious eye at the fact that ballad singers with much smaller fan bases consistently outperform stars like Exo, IU and Twice, on the charts.

Seven Seasons, Park’s agency, promised to protect its singer with all of the legal support they can get.