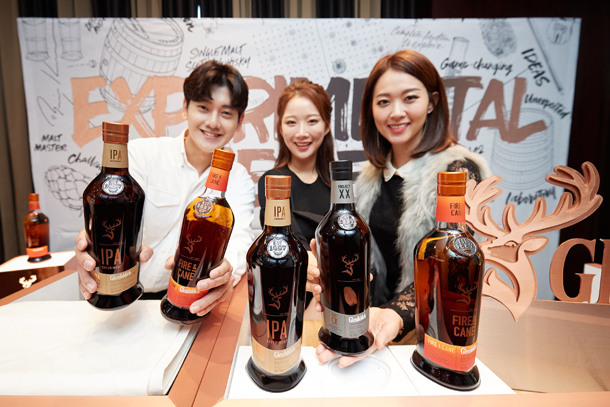 The Glenfiddich Experimental Series is a series of what the distiller calls “groundbreaking single malts.” The three varieties released in Korea are IPA Experiment, Project XX and Fire & Cane.

The distiller says that IPA Experiment is to be the world’s first single-malt Scotch whisky finished in India pale ale craft beer casks. Project XX is an exclusive whisky created through the collaboration of 20 of the world’s leading whisky experts. Fire & Cane marries the smoky whisky with non-peated malts that have matured in bourbon casks.

The fourth edition in the Experimental Series, Winter Storm, is not currently available in Korea.

The price of the new releases starts at the early 100,000 won ($90) range, placing them at the lower end of the Glenfiddich selection in terms of price.

“Although retailers could set different prices, the price of new releases fundamentally start at 115,000 won,” said a spokesperson for William Grant & Sons Korea.

“There has never been a period when the domestic whiskey market has seen such a drastic transformation,” said Cody Kim, general manager of William Grant & Sons Korea at a press event held at Hotel Shilla in central Seoul on Tuesday. “I have mulled a lot on responding to the confusing market since changing jobs from the luxury industry. The plan is to continuously introduce new releases to meet consumer demands in Korea.”