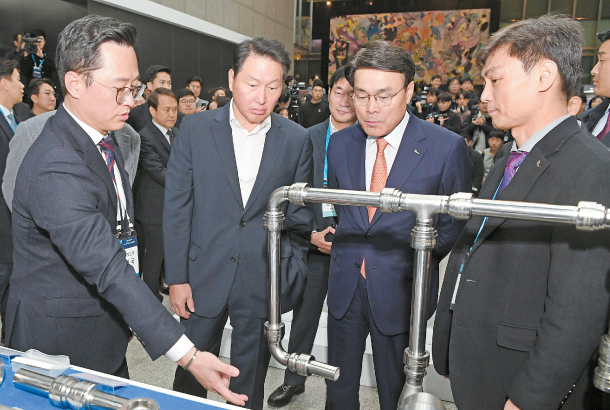 On Tuesday, the steelmaker organized a public event where it presented its efforts over the past year and a half since Chairman Choi Jeong-woo announced the company’s “corporate citizen” business philosophy - to seek economic and social growth to benefit a range of stakeholders.

“The recent trend in business management shows companies starting to realize that the pursuit of profit cannot lead to a sustainable business,” said Choi during an opening speech at the event held in Posco Center in Gangnam District, southern Seoul, on Tuesday.

“This year, we established a set of protocols to set the basics of our ‘corporate citizen’ philosophy. We will embark on putting these rules into practice next year to produce real results.”

SK Group Chairman Chey Tae-won was invited to the event to give a lecture explaining SK’s strategy to create social value and why more companies should take part in the initiative. He started his speech by pointing out that the speed of improvement was not in line with the rapid increase of social issues, calling for private companies to step in.

“There was a time when the role of companies in society was confined to profit making. But consumers are changing - they no longer purchase things because they are cheap - so are governments and investors,” said Chey. “For companies today, creating social value is not simply a responsibility; it’s a matter of survival, of money.”

Chey explained that contributing to society’s sustainability is an investment for the future as a company cannot sell products without its consumers. In recent years, Chey has been the most vocal corporate leader in Korea to emphasize companies’ role in tackling issues like the environment or supporting various stakeholders like low-level suppliers.

While Chey has spoken about social value in front of SK employees multiple times, this was the first time he has been invited to present his ideas to another company. Posco explained the invitation came about based on a mutual understanding that Chey’s philosophy and the steelmaker’s “corporate citizen” initiative shared a common purpose.

“The reason I’m here today is because SK can’t do this alone and neither can Posco - we need to join forces,” said Chey. “New technology can be used to innovate businesses and solve social problems. At the same time, it’s important that companies share technology with society and various stakeholders to create social value.”

The two corporate heads met earlier this year in August along with their senior executives. The meeting created speculation that Posco and SK, respectively the third- and sixth-largest conglomerates in Korea, may be looking for joint business opportunities, but Choi later told local reporters they met to share ideas about social responsibility.