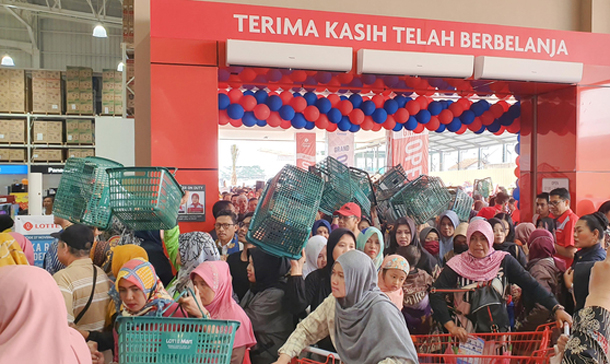 Retailers are opening overseas branches one after another as they seek opportunities and an escape from the crowded and increasingly challenging domestic market.

On Nov. 27, Lotte Mart inaugurated its 48th branch in Indonesia at Cimahi, West Java. This month, it will open Nos. 49 and 58, in Pakansari and Tegal. The company is aiming for 100 branches in Indonesia within three years.

It is also making big moves in Vietnam, where it has 14 branches. Lotte Mart is ranked as the 7th-largest retailer and will have 50 locations there by 2023.

Emart has four branches overseas and is aiming to take that to eight this year and to 31 within three years. It will invest 460 billion won ($389.1 million) in Vietnam through 2021.

While the retail companies are growing overseas, they are standing still or shrinking at home.

The number of stores run by Emart, Lotte Mart and Homeplus decreased to 405 in 2019 from 408 in 2016. Just this year, three locations shut their doors: Lotte Mart’s Deokjin branch and Emart’s Deogi and Busan branches.

Regulation is driving much of the exodus. Under the Distribution Industry Development Act, large discount chain outlets are prohibited from opening within 1 kilometer (0.62 miles) of a traditional market. The big shops must shut their doors on two Sundays a month, and they cannot operate during certain hours.

The Ministry of Trade, Industry and Energy will be applying revised enforcement rules of the Distribution Industry Development Act from Dec. 28. While retail chains were previously required to file a report to local governments on how their new branches will affect local retail businesses, such as beverage and food establishments, after Dec. 28, the report must include possible effects on specialized retail businesses, such as clothing, furniture and toy shops.

“Due to current government regulations, opening new branches in cities is virtually impossible, and the same applies to the outskirts of the cities. Even if we have secured the land to build them, we have to get ‘permission’ from local business,” said a retail executive. “Additional regulations would be a death sentence, so we are looking for alternative markets overseas.”

Convenience stores are in a similar situation. The unstoppable growth of these businesses came to a sudden halt last month after the government said new convenience stores cannot be opened too close to each other. The regulation forbids the establishment of new stores within 50 meters (164 feet) of stores that sell cigarettes in rural areas and 100 meters in urban areas.

Following the new regulation, growth slowed, with new openings falling 17 percent in the January to September period on year.

After the convenience store industry hit a wall, it shifted its attention to regional markets. CU, which entered the Mongolian market last year, is expected to increase the number of its branches there to 55 by the end of this year. Next year, it will open its first Vietnamese branch.

With domestic retail companies focusing on overseas expansion, some observers cite the balloon effect, which describes how restrictions in one area may lead to unintended consequences elsewhere.

“The Distribution Industry Development Act and the regulation that bans the launch of new branches in close proximity to others were created with good intentions to protect traditional markets and small businesses, but they both failed to closely examine possible side effects, eventually ending up as a hurdle to investments in Korea,” said Kim Si-wuel, a consumer information science professor at Konkuk University.

Experts say that the slowdown could hit job growth, one of the government’s top priorities.

“The domestic retail industry had no choice but to turn to overseas markets as the domestic market became less attractive on top of stricter regulations,” said Seo Yong-gu, professor of business administration at Sookmyung Women’s University.

“During this process, job creation in the retail industry stagnated,” the professor added.