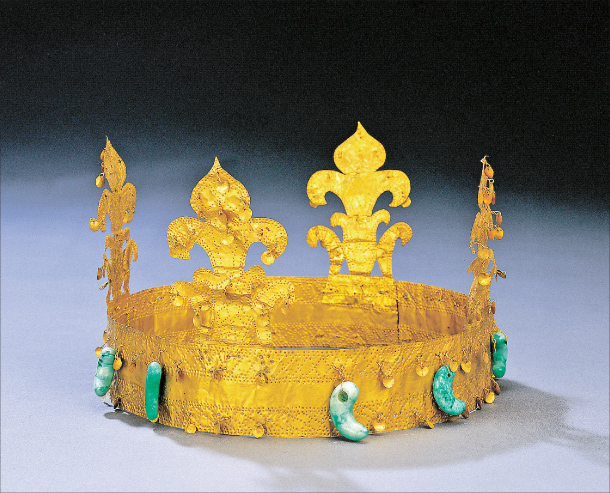 The Gold Crown, National Treasure No. 138, is one of the Gaya relics on display at the “Gaya Spirit - Iron and Tune” exhibition at the National Museum of Korea. [NATIONAL MUSEUM OF KOREA]

In Korea’s history, Gaya (42-562) is a relatively unknown confederacy compared to the ancient kingdoms like Baekje (18 B.C. to A.D. 660), Goguryeo (37 B.C. to A.D. 668) and Silla (57 B.C. to A.D. 935). Gaya was a confederacy of territories in southern Korea between the first and sixth centuries. Because it was conquered by Silla in 562, historians insist that the rich culture of Gaya, including its outstanding artistry, greatly influenced much of Silla culture.

To shed light on this lesser-known chapter of Korean history, the National Museum of Korea in central Seoul kicked off a special exhibition titled “Gaya Spirit - Iron and Tune” on Tuesday at the museum’s Special Exhibition Gallery.

The exhibition showcases around 2,600 relics from Gaya that 31 institutions have excavated over the years, including two famous items that are designated as national treasures. This exhibit is the first focused on the Gaya confederacy in 28 years.

“The rapidly increasing number of archeological findings discovered through many projects since then signaled that it is time to once again put together the new achievements and emphasize the historical significance of Gaya,” said Bae Ki-dong, director-general of the National Museum of Korea. It also coincides with President Moon Jae-in’s agenda of rediscovering the Gaya confederacy.

“People only vaguely know Gaya as a confederacy of states,” said Yoon On-shik, the curator of the museum. “But Koreans who went to schools here will at least recognize it as the ‘kingdom of iron.’”

Gaya was situated in the mouth of Nakdong River, around fertile plains that had rich iron deposits. Therefore, it was able to create and export large quantities of iron ore, iron armor and other weapons to Baekje and the Wa Kingdom in Japan. (In fact, Silla annexed Gaya as a punishment for assisting Baekje in a war against Silla.)

Visitors to the exhibit will be introduced to Gaya, starting with the famous myth of King Suro of Geumgwan Gaya (r. 42-199) and his queen Heo Hwang-ok. Korean students learn in school that King Suro was one of the six princes who were born from six golden eggs that descended from the sky. He was the first born among them and led the others in setting up the six states while becoming the first king of the Gaya confederacy. In the myth, his queen was a princess from a faraway land who crossed the sea to marry King Suro. According to “Samguk Yusa,” a book about the legends and history of ancient Korea’s Three Kingdoms (57 B.C. to 668 A.D.), Queen Heo brought a stone pagoda known as pasa on her ship to calm down the raging sea. As the stone includes components that are not found in Korea, it is believed to actually have come from a foreign land. 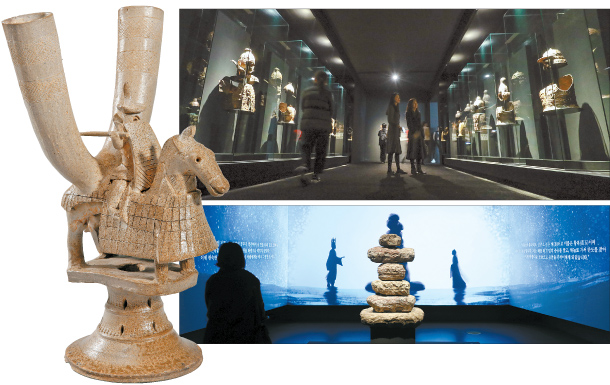 The National Museum of Korea in central Seoul kicked off a special exhibition on Korea’s Gaya confederacy on Tuesday. Top and above show different corners of the exhibition hall. It features around 2,600 relics from Gaya, including the “Horn Cup in the Shape of a Warrior on Horseback,” which is National Treasure No. 275, left. [YONHAP]

Experts insist that Gaya’s craftsmanship is so eloquent and detailed that it can no longer be seen today, no matter how advanced technology becomes.

During recent excavation projects, pottery from the various regions of Gaya were discovered, showing how “Gaya embraced diversity,” explained Yoon. “Gaya did not consolidate each polity with supremacy but respected the individuality of each state.”

Garaguk, Araguk and Gojaguk, which were all member states of the Gaya confederacy, for example, all show different styles.

“Garaguk’s mounted dishes have wide mouths, while Araguk dishes are decorated with flame-shaped holes,” said Yoon. “Gojaguk on the other hand has triangle-shaped holes.”

Visitors may find the collection of artifacts displayed all together about halfway through the exhibit astonishing. These were excavated from the Goryeong Jisandong Daegaya Tumuli, which houses the tomb of the Garaguk king as well as 32 separate rooms for other people who were buried alive with the king.

As the “state of iron,” the exhibit also displays a large amount of ironware from Gaya, including the “Horn Cup in the Shape of a Warrior on Horseback,” which is designated as National Treasure No. 275. Another national treasure on display is the “Gold Crown,” No. 138.

The “Gaya Spirit - Iron and Tune” exhibition will run through March 1, 2020, and then tour to other museums, including the Busan Museum, the National Museum of Japanese History in Sakura, Japan, and the Kyushu National Museum in Dazaifu, Japan, throughout next year. For more information, visit www.museum.go.kr