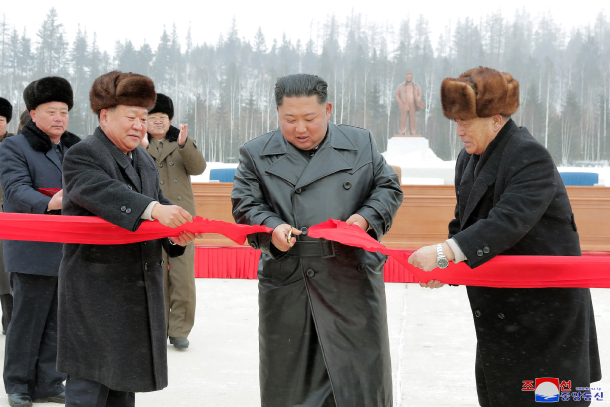 North Korean leader Kim Jong-un attended a dedication ceremony in Samjiyon County in the foothills of Mount Paektu on Monday, a possible indicator of a major decision to come amid the enduring uncertainty in denuclearization talks with Washington.

According to an English language report published by the North’s state-run Korean Central News Agency (KCNA) on Tuesday, Kim cut the ribbon on the second stage of a major building initiative designed to overhaul the county’s township.

Samjiyon County, located in Ryanggang Province, is a highly symbolic location in North Korea which the regime claims is the birthplace of Kim Jong-un’s father and the country’s former dictator, Kim Jong-il. After his rise to power in 2011, Kim Jong-un launched a three-stage construction project to refurbish the historic site and provide it with the infrastructure to match its status.

With the final leg of the project slated for completion by 2020, Kim Jong-un has used his visits to Samjiyon as opportunities to promote his economic development agenda - as well as hint at major policy changes to come, as he did in his earlier high profile visits to Mount Paektu.

According to South Korea’s Unification Ministry, Monday’s trip marked the third time Kim visited the township of Samjiyon County this year, making the location the dictator’s most frequently visited venue among his 22 public appearances related to economic projects in 2019.

Most recently, Kim stopped by Samjiyon after scaling Mount Paektu atop a white horse in October, a widely publicized trip that the KCNA said foretold of a “great operation to strike the world with wonder again.” Kim himself stressed during the trip a resolve to “pave the avenue to development and prosperity in our own way” in spite of attempts by “U.S.-led anti-[North Korea] hostile forces” to “strangle us with the chain of pressure.”

An official at the South’s Unification Ministry said that while Monday’s visit appeared to be mainly intended to just commemorate the building project, “the situation needs to be watched given that it is the end of the year.”

With its nuclear negotiations with the United States at a persistent stalemate due to apparently unbridgeable differences over sanctions relief, Pyongyang continues to increase pressure on Washington to abandon what it claims is a “hostile policy” aimed at the North, lest relations return to the hostile state they were before diplomatic engagement began last year.

On Tuesday, Pyongyang released a new English-language statement from Ri Thae-song, North Korea’s vice foreign minister in charge of U.S. affairs, accusing Washington of hatching a “foolish trick” to keep North Korea bound to dialogue without showing any intention to change its approach.

While the North has “done its utmost with maximum perseverance not to backtrack from the important steps it has taken on its own initiative,” Ri said, “what is left to be done now is the U.S. option, and it is entirely up to the United States what Christmas gift it will select to get.”

Accompanying Kim to Samjiyon were the who’s who of North Korea’s top leadership, including Choe Ryong-hae, the regime’s formal No. 2 figure and President of the legislative Presidium; Kim Jae-ryong, the country’s premier; and key economic officials like Pak Pong-ju, O Su-yong, as well as military chiefs like Park Jong-chon, who heads the country’s military.

Given the ostensible high profile given to the ceremony, Kim could be underscoring an ambition to transform the Samjiyon-Mount Paektu area into a major tourist zone while simultaneously signaling his intention to push through his economic pursuits independent of the outcome of dialogue with Washington.