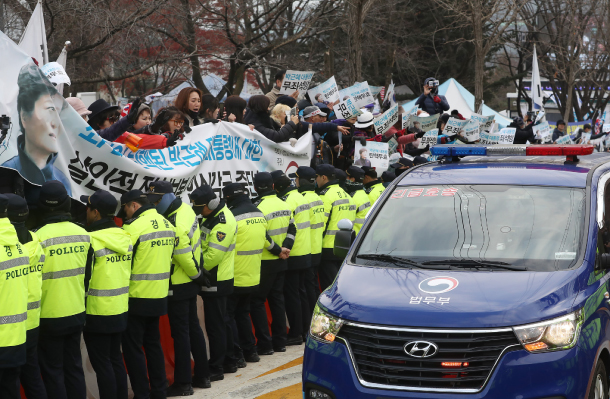 Former President Park Geun-hye returned to her jail cell on Tuesday, ending her 78-day hospital stay for a surgery on her shoulder and subsequent rehabilitation.

A Justice Ministry vehicle carrying Park left Seoul’s St. Mary’s Hospital in Seocho-dong, Gangnam District, around 1:45 p.m. and headed to the Seoul Detention Center. In hospital issued clothes and wearing a face mask, Park entered the car as police stopped the media from approaching her.

Rep. Cho Won-jin, chairman of the Our Republican Party, and Ryu Yeo-hae, former member of the Liberty Korea Party’s Supreme Council, waited for the ex-president in the parking lot, along with about 10 followers of Park who were there to express their support.

Park left prison on Sept. 16 to receive surgery on her left shoulder. She was operated on the following day and had remained in the VIP ward of the hospital since Tuesday. She has been detained since March 2017 on charges of power abuse, corruption and election law violation.

Park was impeached for abuse of power and her involvement in a corruption scandal and removed from office in March 2017. She was placed under arrest that same month and indicted in April that same year. She has remained in detention throughout her trials.

In April this year, while she was serving her two-year sentence for election law violation and awaiting the Supreme Court’s decisions on her abuse of power and corruption cases, Park requested the prosecution allow her a time of reprieve from imprisonment for health reasons. Her request was denied. She made another request on Sept. 5, but it was again rejected.

Park, then, made a separate request to the Ministry of Justice for a time of reprieve to receive medical treatment at a hospital.

In Korea, requests for reprieve from a prison sentence must be made to the prosecution, but requests for temporarily leaving the prison to receive surgery or other treatment at hospitals are made to the head of the detention center, who then submits them to the ministry.

The ministry granted her request on Sept. 11, and she was admitted to the hospital on Sept. 16, leaving prison for the first time in 900 days.