Probe is underway on death of investigator

Probe is underway on death of investigator 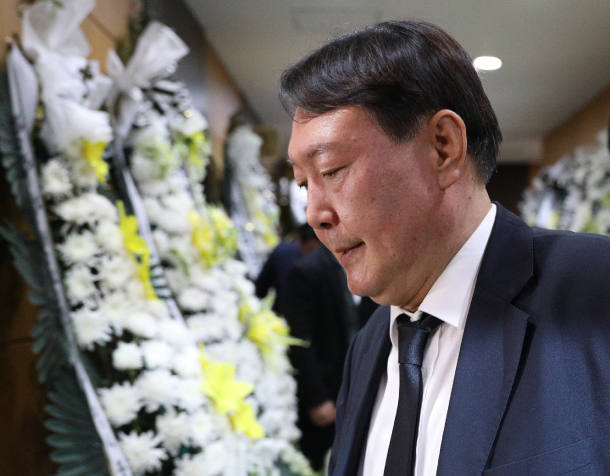 Prosecutor General Yoon Seok-youl visits the Catholic University of Korea’s Seoul St. Mary’s Hospital in Seocho District, southern Seoul, Monday to pay his respects to an investigator from the Seoul Eastern District Prosecutors’ Office who died Sunday in an apparent suicide amid an election-meddling probe that involves the Blue House. [NEWS1]

Prosecutors Tuesday reviewed a nine-page note left by an investigator from the Seoul Eastern District Prosecutors’ Office after his apparent suicide on Sunday and are waiting for the results of a forensic analysis of his cellphone.

Prosecutors from the Seoul Central District Prosecutors’ Office, who are investigating an alleged election-meddling case that involves the Blue House, confiscated both items Monday from the Seocho Police Precinct in southern Seoul, a day after the investigator was found dead in an office building in Seocho District.

The investigator, 48, who was previously dispatched to work for the Blue House, was found dead on Sunday at around 3 p.m. in an office owned by his acquaintance, just three hours before he was scheduled to appear at the Seoul Central District Prosecutors’ Office for questioning as a witness.

He was supposed to offer his testimony about his time in the Blue House senior secretary for civil affairs office, which is currently facing mounting suspicions that it meddled in the Ulsan mayoral election in June 2018.

According to sources with knowledge of the investigator’s note, he said he was “sorry” to the chief of the prosecution, Prosecutor General Yoon Seok-youl, and asked him to “consider” his surviving family members. The investigator is known to have been close to Yoon for the last 10 years after they worked in the same team at the Supreme Prosecutors’ Office’s investigative intelligence division.

Yoon paid his respects at the investigator’s mourning alter at the Catholic University of Korea’s Seoul St. Mary’s Hospital on Monday. An official from the Supreme Prosecutors’ Office said Yoon appeared to be feeling despondent about the investigator’s death because he had deep trust in him. President Moon Jae-in sent a wreath.

For nearly two years from 2017, the investigator worked under Baek Won-woo, Moon’s former secretary for civil affairs, whose office was under former Senior Secretary for Civil Affairs Cho Kuk.

The investigator was a member of an inspection bureau led by Baek, which was in charge of investigating Moon’s close aides and his relatives.

Baek has been facing allegations that he compiled a report that falsely accused the aides of Ulsan’s former mayor of misconduct and passed the report to the police, pressuring officers to investigate them three months before the mayor tried to run for a second term last year - and ultimately lost to the candidate backed by the ruling Democratic Party, Song Cheol-ho.

The investigator had faced allegations he helped Baek collect information to compile the report, and prosecutors were planning to question him on those suspicions last Sunday, before he was found dead.

In March 2018, Ulsan police launched a probe into Kim’s younger sibling and Kim’s chief secretary on allegations they interfered in construction deals.

The police referred the cases to Ulsan prosecutors on May 11, just a month before the June 13 local elections. In March this year, Ulsan prosecutors cleared them of their charges and criticized Ulsan police for “causing controversy” by failing to keep with political neutrality and abusing their investigative authority. The LKP filed a complaint against Ulsan’s police chief who supervised the investigation, Hwang Un-ha, who’s now the police chief of Daejeon, accusing him of abusing his official authority and violating the Public Official Election Law.

After a year of investigation, Ulsan prosecutors referred the case to the Seoul Central District Prosecutors’ Office last week, citing that “most people” involved were currently living in Seoul.

The Blue House adamantly denied accusations that it ordered the police to investigate the former Ulsan mayor. On news reports that the dead investigator traveled to Ulsan in January 2018 with another Blue House official as Ulsan police were catching on to the Ulsan mayor case, Blue House spokeswoman Ko Min-jung denied they visited to pressure Ulsan police about the investigation, saying they were there to canvas opinions from the Ulsan maritime police and the Ulsan prosecution on a different case they were bickering over with each other.