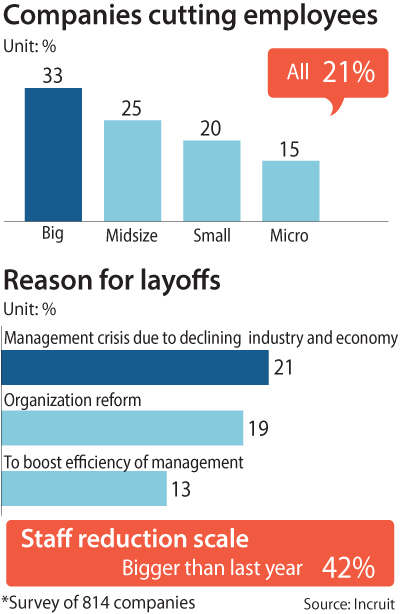 Korean Air plans to let 20 percent of its executives go to improve efficiency, the company said on Nov. 29, and it is not alone in reducing numbers.

Layoffs are widespread, deep and across the board.

Doosan Heavy Industries & Construction gave pink slips to 13 of 65 executives on Nov 22. Earlier this year, the company ordered 2,400 general managers out of 6,000 total employees to take two-month leaves at 50 percent pay and even ordered partial transfers to related companies. The moves came as a result of the government’s antinuclear policies and sluggish electricity demand.

“Even though the company’s management is in a difficult situation, reducing the number of executives was the last-ditch effort to prevent the layoff of general staff members,” said an official from the company.

This year, one out of five companies has reduced staff, and those that did cut made deeper cuts than in the previous year.

According to a survey by job research website Incruit of 814 companies, 21 percent responded that they have made layoffs this year.

Companies said a difficult management environment was the leading cause for layoffs. A total of 21 percent of them blamed “aggravating management crises due to declining industry and economy,” 19 percent of companies pointed to “organization reform” while 13 percent mentioned “boosting efficiency of management.” Multiple answers were allowed.

Other causes for layoffs were: “letting go those responsible for falling short of target goal,” at 8 percent, “making space for new employees,” at 6 percent, and “the rise of the minimum wage,” at 6 percent.

Forty-two percent of companies responded that they made more staff redundant “than last year.” A total of 24 percent said they were laying off to a similar degree as last year, and nine percent said that the firing was less deep.

This year, staff “considering early retirement” were laid off the most, representing 23 percent of the total.

“Companies are letting go those who want to go, and employees with higher salaries and who are older are on the ‘hit lists,’” Incruit said.