Korea Development Bank (KDB) Chairman Lee Dong-gull denied providing any special treatment in granting a loan to the head of a hospital known to have close connections with President Moon Jae-in and the ruling party.

He also expressed hopes about the sale of KDB Life Insurance and his confidence that the Asiana Airlines deal will go through smoothly by the end of this year. 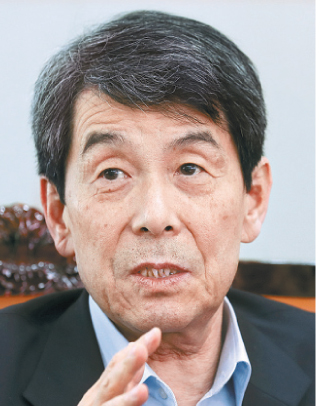 During a press briefing on Wednesday, Lee said he said the 2012, 140 billion won ($117 million) loan approved to the head of Wooridul Hospital, which specializes in spine treatment, was processed normally.

He added that the approval process went smoothly, and said that the property being mortgaged was worth 100 billion won. Lee noted that the loan was not a new loan but a refinancing.

He referred all additional questions to the then-chairman Kang Man-soo, who was the finance minister during the Lee Myung-bak administration.

A former business partner of Lee Sang-ho, the spine hospital head, raised questions about the loan approval, as the doctor had bad credit and has once filed for restructuring.

KDB Chairman Lee also said he will accept the price offered for KDB Life, formerly Kumho Life Insurance. The market currently estimates the value of the life insurer at around 200 billion won. This is low considering that the bank purchased the insurer for 650 billion won in 2010 and invested 1 trillion won in it.

“I agree to the suggestions that the market’s interest is on Prudential Life Insurance, which is for sale, and the life insurance industry currently isn’t in good shape,” Lee said, adding that he wishes he could get more.

“While KDB Life’s situation is extremely unfavorable, it has stabilized quickly through cost cutting efforts made over the last two years,” Lee said.

“The situation will improve in the next two to three years if it stays on this course,” Lee said. “We have achieved our first goal by putting it up for sale in the market.”

The KDB chairman expressed confidence that the sale of Korea’s second-largest airline will be completed smoothly.