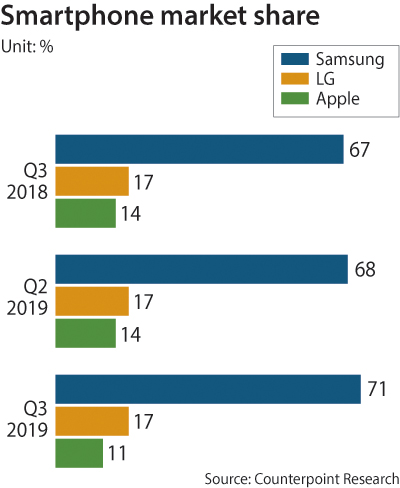 Smartphone sales rose slightly in the third quarter on demand created by the rollout of 5G, though the iPhone lost some market share as customers held back on buying until the latest version was released.

According to Hong Kong’s Counterpoint Research, sales of smartphones in Korea were up 1.6 percent in the July through September period from the same period a year earlier. Sales were up 6 percent from the second quarter.

Samsung Electronics maintained its lead and grew its market share, with 71 percent of sales, up from 67 percent in the third quarter of 2018. The share of LG Electronics was 17 percent, while Apple had 11 percent, down three points on year.

Smartphone sales have been sluggish in recent years due to market saturation. An estimated 90 percent of the population has one of the devices.

5G, which was rolled out in Korea in early 2019, has helped breathe new life into the market.

Its lack of a 5G smartphone and the release of Apple’s new iPhone in the fourth quarter were seen to have contributed to the slight decrease in Apple’s presence in the market in the third quarter compared to the same period a year ago. Apple released the iPhone 11 in October.

“Samsung earned the title of releasing the first global 5G smartphone and the first global foldable phone,” said researcher Lim Soo-jung from Counterpoint Research. “Although their sales are not expected to make major difference in Samsung’s overall performance due to the highly limited supply worldwide, the technologies it has shown through [the] 5G phone and the foldable phone are expected to improve sales of Samsung in the mid- to long term through the enhanced brand image and trust people have.”

The researcher projected the smartphone market to continue growing in the fourth quarter as the LG V50S ThinQ 5G and iPhone 11 were released in October.