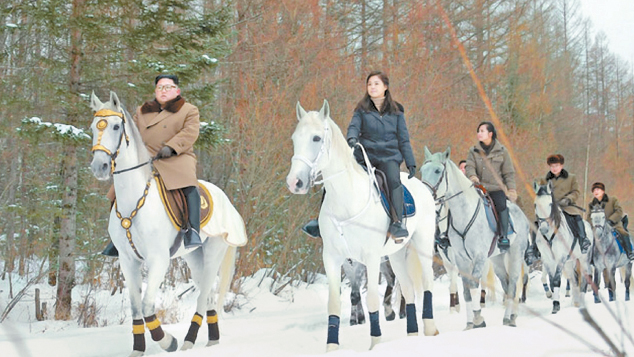 This photo released by the North’s Korean Central News Agency on Wednesday shows North Korean leader Kim Jong-un, far left, with his wife Ri Sol-ju and the North’s senior officials, riding white horses up a snow-covered Mount Paektu, a volcano on the North Korean-Chinese border. Kim visited revolutionary battle sites on the highest peak on the Korean Peninsula, which is considered sacred by Koreans. [YONHAP]

U.S. President Donald Trump said he was prepared to use military force against North Korea if he had to, an apparent warning to Pyongyang as tensions build between the two countries in the run up to the year’s end.

In a press conference in London Tuesday after a meeting with the secretary general of NATO, Trump gave North Korean leader Kim Jong-un the benefit of the doubt with respect to denuclearization negotiations, stressing they share a unique and “very good personal relationship.”

The president credited himself for making the United States “more powerful, militarily, than we ever have been,” but said he was ready to use force “if we have to.”

“My relationship with Kim Jong-un is really good, but that doesn’t mean he won’t abide by the agreement we signed,” Trump said. “You have to go and look at the first agreement that we signed. It said he will denuclearize. […] I hope he lives up to the agreement, but we’re going to find out.”

Noting Kim “definitely likes sending rockets up,” Trump also made a reference to a moniker he gave the North Korean dictator in 2017 - “Rocket Man” - when he publicly traded barbs with Pyongyang over the latter’s nuclear and intercontinental ballistic missile tests.

While a mix of tributes and taunts are typical of Trump’s ad hoc public comments, his remarks come at a sensitive period. Nuclear negotiations have been deadlocked for months, and Pyongyang is threatening to return to confrontation if no deal is reached by the year’s end.

After visiting Samjiyon County to cut a ribbon on a major building project on Monday, Kim was again featured in North Korea’s state media on Wednesday riding a white horse harnessed with gold-studded reins as he scaled Mount Paektu. According to the official Korean Central News Agency (KCNA), Kim, his wife and top military officials toured the sites of revolutionary battles where his grandfather, founding leader Kim Il Sung, fought against imperialist Japan, which ruled Korea from 1910 to 1945.

The equestrian photo op on the mountain, regarded as a sacred place in North Korea’s political mythos, appeared to intentionally echo that history of guerilla fighting, and by implication, show that Pyongyang will not bow to pressure from the United States.

The dictator’s high-profile visits to Mount Paektu in the past often preceded key policy decisions, like in October, when Kim made a nearly identical visit to Mount Paektu on horseback before ordering the destruction of South Korean properties at Mount Kumgang.

October also witnessed a test of a new multiple rocket launcher system by the North, followed by a coastal battery drill in the Yellow Sea in late November and another pair of rocket launches last week.

Testifying to a new major decision in the works, KCNA reported Wednesday that the Presidium of the North’s ruling Workers’ Party decided to convene a plenary meeting of the party’s Central Committee in the latter part of December “in order to discuss and decide on crucial issues in line with the needs of the development of the Korean revolution and the changed situation at home and abroad.”

Plenary sessions of the Central Committee are usually used by North Korea to promulgate and adopt major public decisions reached by the Kim family and the Politburo. Given that Washington has shown little response to Pyongyang’s demand that it lift its “hostile policy,” Kim may use the occasion to announce a reversion to a hard-line policy toward the United States and South Korea.

While that may be brinksmanship by the North, Pyongyang appears to have been preparing for the contingency, building up closer relations with its partners in China and Russia, as well as a more advanced conventional weapons arsenal.