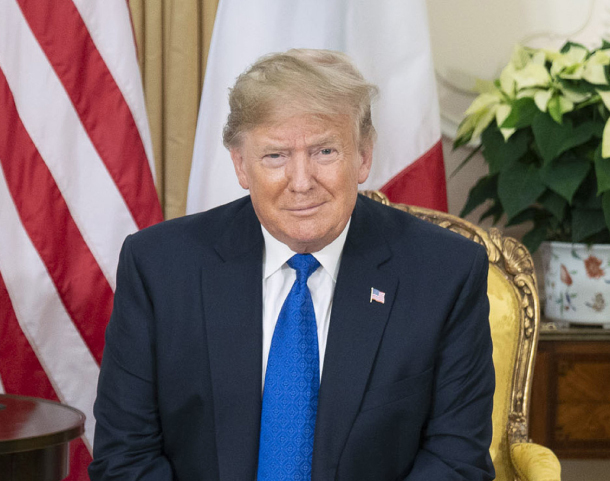 U.S. President Donald Trump said that the necessity of keeping U.S. troops in Korea “can be debated” as Washington continues to pressure Seoul to pay a much steeper contribution to their next bilateral defense cost-sharing pact.

“I can go either way,” Trump said, when asked by a reporter ahead of a NATO summit in London on Tuesday whether it was in U.S. national security interests to station U.S. troops on the Korean Peninsula. “I can make arguments both ways […] I think if we’re going to do it […] they should burden share more fairly.”

His remarks come as the Korean and U.S. negotiating teams on Tuesday in Washington kicked off their fourth round of talks for the 11th Special Measures Agreement (SMA) as the current cost-sharing pact expires at the end of this year. Washington has reportedly been pressuring Seoul to pay five times its current contribution, or some $5 billion. It appears that Trump raised the withdrawal of the U.S. forces in Korea as a negotiation tactic amid the ongoing talks to seal a new deal with Seoul.

Trump told reporters in a press briefing alongside NATO Secretary General Stoltenberg, “We’re spending a tremendous amount of money to protect South Korea, and we think that it’s fair that they pay substantially more.”

He said, “Last year, I asked them to pay more and they agreed. And nobody knows this - I’ll say it now, I think, for the first time - but they agreed to pay approximately $500 million a year or more for protection.”

He continued, “Now we only had a month or two before the budget ended, so they said, ‘No, no, no.’”

Trump called Koreans “very good businesspeople” and said he met with them “six, seven months ago,” and “we agreed to $500 million more” which “got them up to close to a billion dollars.” He said he told Korea, “It’s not fair. We do a great job. We have 32,000 soldiers there. It cost us, you know, many times what you’re paying. And you have to pay up.”

Trump made similar remarks in the past including in February, when he alluded to Korea agreeing to pay $500 million more in defense “with a couple of phone calls.”

Seoul and Washington in February signed a one-year cost-sharing deal in which Korea was to pay 1.04 trillion won, or around $920 million at the time, up 8.2 percent from the previous year, for the stationing of 28,500 U.S. troops in Korea. Trump in August also referred to the stationing of “32,000 soldiers on South Korean soil.”

Trump also said Tuesday, “It’s not fair for the United States to defend many countries” and added that the “same conversations” were happening with five other countries, including Japan.

Jeong Eun-bo, Korea’s chief negotiator for the SMA, held two-day talks with his U.S. counterpart James DeHart that ran through Wednesday trying to narrow differences. The negotiations for the 11th SMA started in September. DeHart walked out of the third round of talks last month in Seoul, cutting discussions short, and called on Korea to bring out “new proposals.”

On Trump’s remarks on the possible withdrawal of U.S. troops from Korea, Jeong told reporters Tuesday that this had not been “discussed at all” during the talks that day, and added, “I don’t think there has been a change in the situation.”

U.S. lawmakers of the House of Representatives’ armed services and foreign affairs committees, sent a letter to U.S. Secretary of State Mike Pompeo and Defense Secretary Mark Esper Tuesday expressing concern over U.S. demands to “exponentially increase” its annual contribution to roughly $5 billion per year,” saying it could bring about a “wedge” in the alliance with Korea.

They wrote, “At a time when the United States, South Korea and Japan should be working jointly to counter regional security threats ranging from increased North Korean provocations to growing Chinese assertiveness across the region, U.S. demands for a massive increase in South Korean annual contributions serve as a needless wedge between us and our allies.”

They said the demands contradict “key principles and undermine U.S. efforts to affirm an enduring commitment to the region,” stressing the importance of “the interoperability of U.S. and South Korean forces” to deter any provocations by “competitors and adversaries.”

The lawmakers questioned, “What is the basis for the requested increase from $924 million per year to roughly $5 billion per year?” They also asked for an answer within two weeks on the total annual cost of maintaining U.S. military forces on the Korean Peninsula, the impact if no agreement is reached as well as mitigation measures. While supporting an agreement that is “fair and mutually beneficial,” they added negotiations should not be undertaken in a “manner that jeopardizes our alliance relationships or continuity of presence.”