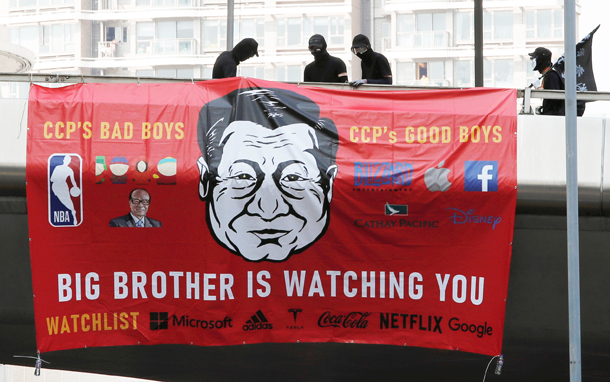 Protesters in Hong Kong put up a banner that reads, “Big Brother is watching you,” in October. [REUTERS/YONHAP]

CHOI JOON-HO
The author is the head of Science and Future Team of the JoongAng Ilbo.

You can see the dystopian future mirrored in China today — the age when science and technology are advanced, but mankind is unhappy. The world you only saw in science fiction films and novels and thought was an exaggeration really exists today.

According to Hong Kong’s South China Morning Post, a regulation that requires Chinese communications providers to scan the faces of users to confirm their identity when opening a new telephone number at an offline store came into effect on Dec. 1.

China already has the technology to confirm the identity of people on the street using artificial intelligence (AI) and surveillance cameras. Foreigners aren’t free from China’s surveillance either. Photos of faces are taken at immigration when entering the country, along with identity verification.

China’s bioengineering is developing at a dizzying speed. Professor He Jiankui of the Southern University of Science and Technology stirred controversy by producing the world’s first super-smart designer babies through embryo gene editing in November 2018.

There are rumors that the Chinese government will take legal action against He, but it is unknown what happened to him and where and how the babies are growing up.

The international science circle shows concerns that China is insensitive to individual human rights and ethics, but research is relatively free and can produce the best outcomes.

At this rate of “development,” China will soon be the world’s best AI and high-tech life science country. A surveillance society like the one in George Orwell’s “1984” or the film “Gattaca” could be realized in China any day now.

Here’s my “unnecessary” concern. If anyone thinks Korea should tighten regulations to learn from China’s mistake, you shouldn’t be worried. Korea has far stricter standards than the global average, not to mention China, on research on AI, big data and life science. The Korean National Assembly is not that clever.