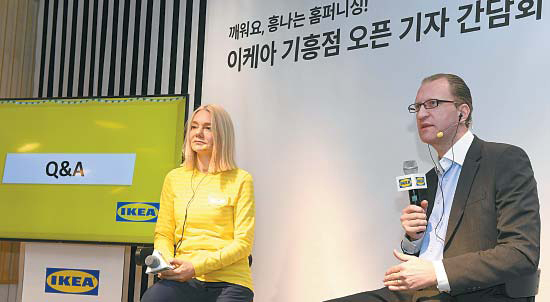 YONGIN, Gyeonggi - Ikea will open its third store in Korea on Dec. 12.

The store, located 40 kilometers (25 miles) south of Seoul, is more digitally friendly than the Swedish furniture giant’s other two stores. It will also offer interior decorating consulting to customers.

Ikea’s first three stores are all in Gyeonggi. The store in Gwangmyeong opened in 2014, followed by the second store in Goyang in 2017.

Its fourth store is set to open in Busan on Feb. 13.

The Giheung branch is the smallest so far with 49,809 square meters (536,000 square feet) of space. But Ikea has high hopes for the branch considering the local demographics.

“Giheung is an ideal location for Ikea as there are many families with young kids,” said Anje Heim, Ikea Giheung market manager, at a press event held at the store on Thursday. She said people from nearby parts of the province, including Suwon, Bundang and Pyeongtaek, will be able to reach the store within an hour.

The new branch offers a digital show room, and customers can experiment to see how certain patterns would look like on furniture.

Ikea started online sales last year, and in the new store, an entire floor is dedicated to customers picking up furniture they ordered online.

“Overall, it will be a win-win [situation for all the furniture companies],” said Fredrik Johansson, Ikea Korea country retail manager. “By coming in, we would increase the total [demand] for home furnishings, and the cake will grow.”

Ikea also intends to open a city center store in Seoul in the first half of next year. Ikea has opened stores in city center locations in New York, Paris and London.

There are several kinds of city center stores. For instance, a planning studio in Manhattan, New York City, offers home interior consulting services to customers, while the store in Paris is a complete store although on a much smaller scale than usual.

Ikea said it will spend the next year testing the kind of format best for Seoul.