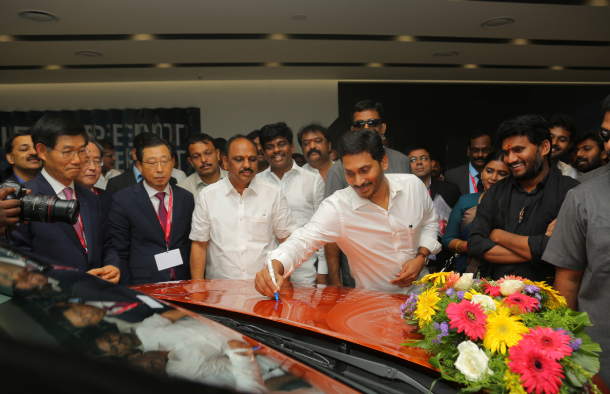 Kia Motors will release two new models catered to the Indian market next year, the automaker said during a ceremony held Thursday to mark the official opening of its first Indian car production facility.

The Kia Motors India’s manufacturing plant in Andhra Pradesh, India, started producing the Seltos SUV in July, the plant’s first production model. Kia said the factory is now fully operational, and it hopes to sell 160,000 cars in the country next year.

Among the two new models scheduled for release next year, a premium multipurpose vehicle (MPV), or minivan, will be released in the early half of the year, and a new sub-compact SUV model will be released later that year.

Kia is planning to showcase the MPV at the Delhi Auto Expo that kicks off in February next year. As it is targeting the premium vehicle market, the new car will have a luxurious design as well as top-notch IT technology to differentiate it from existing MPVs in India.

The planned sub-compact SUV is a strategic model intended to tackle emerging markets in the Asia-Pacific region, as well as Africa and the Middle East, according to Kia.

Through the lineup of SUVs and minivans, the carmaker said it hopes to bolster its brand image as a utility vehicle producer in India.

As it expands its presence in the country with the factory, Kia said it will strengthen sales with a new digital sales strategy using a digital platform that puts all aspects of car purchasing online, Kia said. To enhance after sales services, the company will launch a new 24-hour, real-time mobile service for vehicle maintenance.

“Now fully in operation, our new plant allows us to serve the growing Indian car market and export models like the Seltos to markets across the world,” said Park Han-woo, president of Kia Motors, during the opening ceremony. “In the longer term, it will also become a vital part of our global production network.”

Kia is planning to make India a base for its mobility services as well.