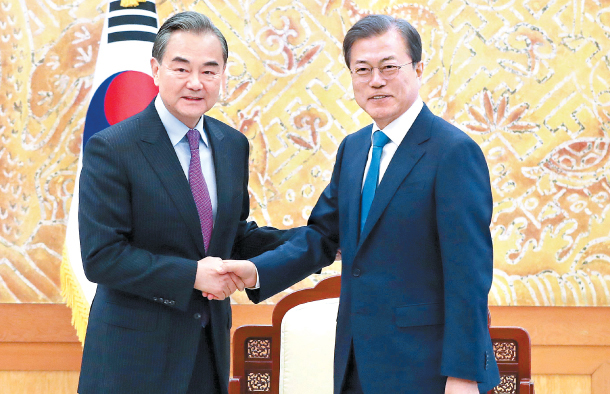 In a meeting with Chinese Foreign Minister Wang Yi Thursday, Korean President Moon Jae-in asked for Beijing’s support in the process to completely denuclearize and establish peace on the Korean Peninsula which is at an “important crossroad.”

Wang, also a Chinese state councilor, paid a courtesy call to Moon at the Blue House on the last day of his two-day trip, his first visit to Seoul in five years.

Moon said, “We request the Chinese government to continue to have interest and support the process until a new era of a peaceful Korean Peninsula that is free of nuclear weapons is reached.” Moon expressed gratitude to China for “playing a very positive role in the journey toward peace on the Korean Peninsula.”

Wang, echoing his remarks to Korean Foreign Minister Kang Kyung-wha the previous day, said, “The current international order is threatened by the unilateralism and power politics.”

While he did not call out the United States by name, his remarks were seen as a jab at the Donald Trump administration, amid the ongoing Sino-U.S. trade war. Wang again called for South Korea and China to “defend multilateralism and free trade” and said that the two countries as neighbors should engage in dialogue and cooperation in a timely manner and follow international norms.

Seoul has often been put in an awkward situation amid the hegemonic struggle between Washington and Beijing especially as the two sides try to assert more influence in the Asia-Pacific region with the U.S. Indo-Pacific Strategy and China’s Belt and Road Initiative.

Seoul and Beijing have worked to mend relations after tensions escalated over the deployment of the U.S.-led Terminal High Altitude Area Defense (Thaad) antimissile system to Korea in 2017, a move strongly protested by China as a threat to its strategic interests and leading to economic retaliatory measures.

Beijing has also been sensitive to Washington’s efforts to get Seoul to partake in a U.S.-led missile defense system and in trilateral security cooperation with Tokyo. Washington has also been encouraging allies to join in its boycott of Chinese telecom giant Huawei’s products on security grounds.

Wang mentioned the vibrant trade and people-to-people exchanges between the two countries. For the upcoming Korea-China-Japan summit, he said that it is important to advance not only Seoul-Beijing ties but ties between the three countries.

Moon said he “looks forward” to meeting Chinese President Xi Jinping soon, which could indicate he may stop by Beijing on his way to or from the trilateral summit in China, which is expected to be held in Chengdu. Moon and Xi were unable to meet on the sidelines of an APEC summit in Chile last month after it was canceled. The Blue House in a statement said Moon also extended invitations again for Xi to pay a state visit to Seoul at an early date next year to further deepen “strategic cooperative partnership.” Xi has yet to reciprocate Moon’s visit to Beijing in 2017.

A Blue House spokesperson in a statement on the meeting said that Moon also reaffirmed Seoul’s three-point principle of zero tolerance for war, guarantee of mutual security and co-prosperity, for peace and denuclearization on the Korean Peninsula.

Earlier in the day, Wang attended a luncheon with political and business leaders hosted at the Shilla Hotel in central Seoul and made similar remarks critical of a “Cold War mindset” and urging for “hegemonic acts” to be left behind. He also had some sharp words about the Thaad deployment, responding to a reporter’s question, saying that the United States made the Thaad “to target China” and added that the issue was one created by the United States.