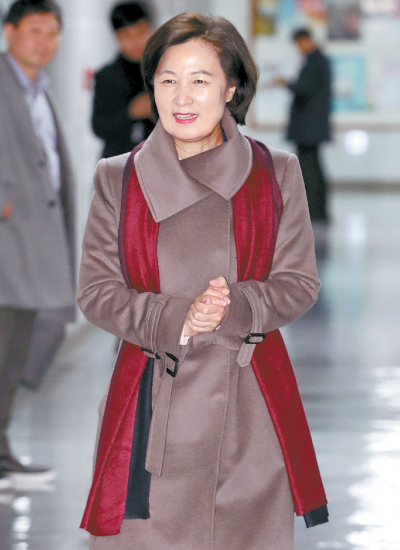 Rep. Choo Mi-ae speaks to reporters in the National Assembly after being nominated as the new justice minister on Thursday. [YONHAP]

“She is the first woman politician who won five legislative elections,” Ko Min-jung, presidential spokeswoman, said at a press briefing Thursday. “She has shown excellent political ability. We believe she will complete the reform of the criminal justice system, a hope of the people, with her strong determination and reformist mind.”

The timing was symbolically defiant. Moon filled the vacancy just one day after the Blue House was raided by prosecutors investigating its abrupt and controversial decision to suspend a probe of a bribery scandal involving a former vice mayor of Busan, a close associate of Moon.

Choo will eventually be the boss of the prosecutors who ordered Wednesday’s raid.

The justice minister post has remained vacant since Moon’s key political ally Cho Kuk stepped down in October amid a criminal investigation into his family’s tangled academic and financial past. Cho only lasted 35 days in the job.

Choo, 61, is a native of Daegu. After studying law at Hanyang University, she passed the bar exam in 1982 and served as a judge in courts around the country. After serving the Gwangju High Court, she was recruited into politics by former President Kim Dae-jung, winning a National Assembly seat from Seoul’s Gwangjin B District in 1996. She won four more terms, except for the 2004 general election.

She won the nickname “Choo d’Arc” - after France’s Joan of Arc - in 1997 when she worked for liberal icon Kim Dae-jung’s presidential campaign. She worked tirelessly in her hometown of Daegu, a stronghold of conservatives, to champion Kim.

Because Choo voted to support a motion to impeach former President Roh Moo-hyun in 2004, she was once considered a pariah by loyalists of the late leader. Moon, however, named her a member of his party’s Supreme Council in 2015, transforming her into a close ally.

With the strong backing of Moon loyalists inside the Democratic Party (DP), Choo became its chairwoman in 2016 - the first-ever politician from a conservative stronghold to lead the liberal party. During her two-year term, she managed to pass the impeachment motion against former President Park Geun-hye and successfully led the DP’s campaigns in the subsequent presidential election in 2017 and local election in 2018.

Known for straightforwardness and an uncompromising attitude, Choo is expected to push Moon’s signature campaign to reform the prosecution - and weaken it. When Cho stepped down from the justice minister post on Oct. 14, he said he wanted a successor with a driving force to complete Moon’s reforms.

“Reforming the criminal justice system and the prosecution is a demand of our time,” Choo said at a press conference at the National Assembly following her nomination. “I will do my best to accomplish this demand of the people with a sense of vocation.”

Choo said Thursday the public wants a justice system centered on human rights, and she believed Moon nominated her to realize such a goal.

Asked about working with Prosecutor General Yoon Seok-youl amid escalated tensions between the administration and the prosecution, Choo said, “Such individual issues are not important.”

She stressed her dedication to transparency in the aftermath of the embarrassingly short term of her scandal-plagued predecessor. “In my 20 years as a lawmaker, I have never worked for my private gain or played partisan politics,” she said. “I think those who recommended me to the post have the same belief that I will be able to promote fairness and justice in administration of the justice system.”

Choo dismissed some politicians’ demand that she leave the DP before taking up such a politically sensitive position. “I have never left the party,” she said. “I don’t think my party affiliation is important.”

Speculation is running high that Choo will shake up the prosecution as soon as she becomes minister. As of now, the prosecution is carrying out at least three investigations that involve allies of President Moon. Probes are ongoing into an allegation that the Moon Blue House carried out a political operation to influence the 2018 local election; the suspicious suspension of a Blue House probe into Moon’s associate Yoo Jae-soo; and the continuing investigation of corruption allegations involving Cho Kuk and his family.

The Blue House and the Ministry of Justice kept six top posts in the prosecution vacant during a reshuffle of the organization in July. A routine reshuffle is scheduled for February, and Choo can advance it and reassign a group of elite prosecutors in charge of the sensitive investigations, political analysts predicted.

“The tenure of Prosecutor General Yoon is guaranteed, so she won’t be able to touch him,” a senior prosecutor told the JoongAng Ilbo on Thursday. “But she can change key prosecutors at the Supreme Prosecutors’ Office and Seoul Central District Prosecutors’ Office. That is a de facto way of dismembering Yoon’s hands and feet.”

Prosecution sources also said the justice minister has power to conduct internal audits of prosecutors. They said she can strictly enforce new regulations - such as a ban on discussing with the media specific charges against a suspect - to intimidate the prosecutors.

A series of controversial reform measures pushed by the Ministry of Justice but halted may regain momentum after Choo takes office. Vice Minister of Justice Kim Oh-soo reported to Moon on Nov. 8 a plan to shut down 41 out of 45 investigation bureaus in prosecutors’ offices nationwide. Kim’s plan also maintained that the prosecutor general must report to the justice minister every single step of an investigation into a high-profile figure.

The measures drew criticism, and the ministry later said they were not finalized. Choo is expected to execute them. The ministry bypassed the prosecution when it created the reform plans. Prosecutor General Yoon, who found out about them through media reports, ordered senior prosecution officials on Nov. 14 to make sure that the reform campaign does not weaken its ability to counter corruption.