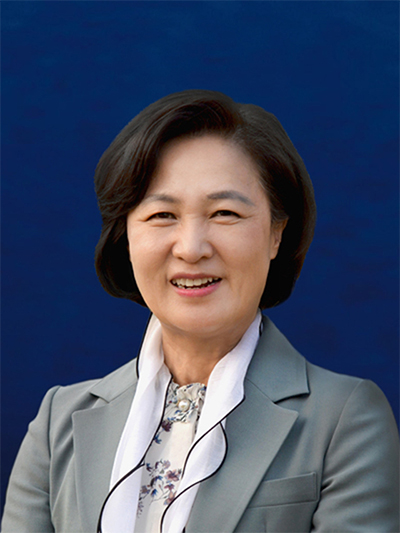 President Moon Jae-in nominated Choo Mi-ae, a five-term lawmaker of the ruling party, as his new justice minister on Thursday.

According to the Blue House, Choo, former chairwoman of the Democratic Party (DP) and a former judge, was named to fill the vacancy in Moon’s cabinet, created after Cho Kuk’s short-lived term as justice minister. After serving as the head of the Justice Ministry for 35 days, Cho stepped down from the post amid the prosecution’s investigations into his family’s alleged academic and financial misdeeds.

In a statement to announce his resignation, Cho said he wants a successor with a driving force to complete the reform of the prosecution.

Cho had been a fierce advocate of Moon’s campaign to weaken the power of the prosecution through a series of reform measures.

Moon’s nomination of Choo as the new justice minister was announced amid escalated tensions between the Blue House and the prosecution. The prosecution is currently carrying out a series of probes into suspected abuse of power and an alleged political operation to influence an election by presidential aides.

Prosecutors raided the Blue House on Wednesday to investigate the presidential office’s abrupt decision to suspend an internal inspection into a former Busan vice mayor’s bribery scandal. The prosecution is investigating why the inspection into Yoo Jae-soo, a close associate of Moon who was serving as director-general of the Financial Services Commission in 2017, suddenly ended.

Choo will have to go through a confirmation hearing by the National Assembly. If she is appointed, she is expected to push forward the campaign to weaken the prosecution.