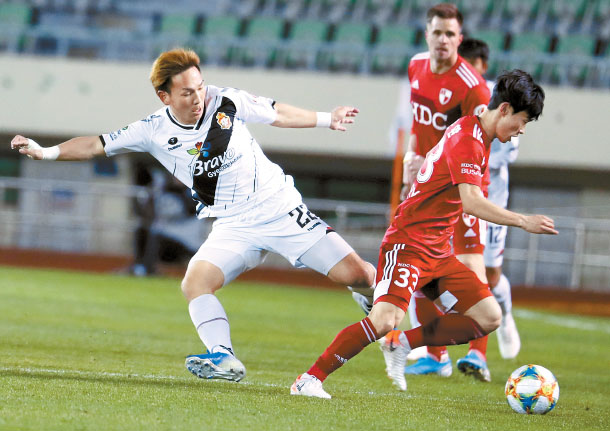 Busan IPark and Gyeongnam FC played to a scoreless draw on Thursday to open their pro football playoff series, with a spot in the top division at stake.

The two clubs traded a handful of shots but couldn’t put one into the net in the first leg of the K League promotion-relegation playoff at Busan Gudeok Stadium in Busan.

The second leg will be played at 2 p.m. on Sunday at Gyeongnam’s home, Changwon Football Center in Changwon, just west of Busan. The winner will get to play in the top-flight K League 1 next year, while the loser will be in the K League 2.

Busan reached the playoff out of the K League 2 and is trying to return to the K League 1 after getting demoted in 2015.

Gyeongnam fell to this playoff after finishing in 11th place out of 12 clubs in the K League 1. It earned a promotion from the K League 2 in 2017.

Busan, which led the K League 2 with 73 goals this year, controlled the pace early on, with Soma Novothny firing a left-footed shot just wide of the net in the 24th minute.

In the 41st, Kim Jin-kyu took a pass from Kim Chi-woo on the left side of the box but missed the intended target.

Gyeongnam was held to just one shot in the first half, and Busan maintained its edge in possession in the second half.

Romulo, Busan’s leading scorer with 14 goals, took a shot right at goalkeeper Lee Bum-soo in the 56th, and Romulo and Lee Jeong-hyeop both had shots blocked by Gyeongnam defenders in the 68th.

Lee Jeong-hyeop took a couple more cracks at the Gyeongnam net, though his header in the 84th and a right-footed shot in stoppage time were both turned aside by Lee Bum-soo.

The promotion-relegation playoff was first contested in 2013. This is Busan’s third consecutive appearance and Gyeongnam’s second.

The last K League 2 club to join the K League 1 through the promotion-relegation playoff was Gangwon FC in 2016.