On ‘Midnight to Sunrise,’ Crush grows up

On ‘Midnight to Sunrise,’ Crush grows up 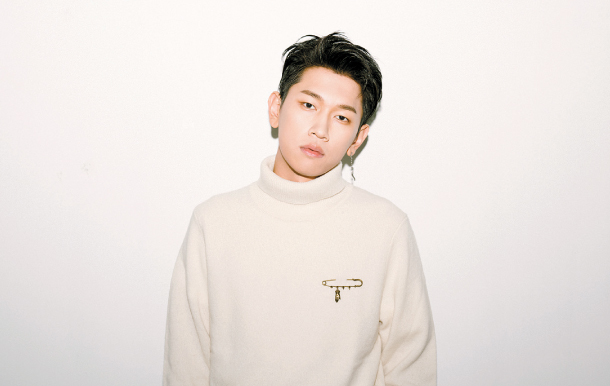 Although singer Crush may have a big fanbase due to his trendy beats and sounds, for this second full-length album “From Midnight To Sunrise,” the musician says that he wants to console the listeners, and, more importantly, himself, through his music.

His second album finally landed on the music charts on Thursday evening, five years and six months after his first album “Crush on You” came out in 2014.

The artist revealed that it took three years to complete his 12-track album, and it was inspired by one of his early morning walks that he took with his beloved dog, Duyu.

“I was working on the EP for my mini album ‘Wonderlust,’ and I usually work during nighttime and early morning,” he said at a recent press interview at a cafe in Sinsa-dong, southern Seoul. “I wanted to freshen up after working long hours and went for a walk with my dog at about six in the morning. I remember it quite vividly. It was during the summer, and I was walking by the Han River and I realized that the day was already bright because the sun had risen in the east, but the west was still dark. While standing somewhere between that border of night and day, I was suddenly struck with a thought about how far I’ve come in my life.”

Starting from the first track “From Midnight To Sunrise,” the songs describe certain periods in a day, ending with the last track, “Good Night.” Producing a full-length album, especially with so many songs, is no easy task, and especially uncommon for a time when artists usually stick to singles and mini albums.

“I do believe that we live in a time where circulation [of trends] is really fast,” the artist continued. “But I thought it was meaningful to have my music and album out there. It was definitely a new challenge for me, in a way, and I think I was comforted every time I completed a track, which was definitely a satisfactory and significant experience even though my other songs may not be as loved as my title tracks.”

The singer also said that working on this album was a “very natural” process compared to his first album.

“I was so passionate with desire to prove my musical capabilities, which dominated all 11 songs on ‘Crush on You,’” he said. “But from 2016 when I started working on ‘Fall,’ I began to want to tell my own stories through the music. So for this album, I focused on the message, melody and storyline of the songs and that naturally led to focusing on my voice with the least number of instruments, which I think created this loose and relaxed atmosphere.”

While it may be time for lunch for others, for Crush it’s still a time when he’s usually asleep.

“My ultimate goal is to be able to work on music as much as I can until I die,” he explained. “I think this album signifies a second chapter as an artist, and this is the point in my life where I can really begin to create music.

“I hope this album is remembered as a portrait of me as Shin Hyo-seob rather than Crush. I hope my music is able to provide [comfort] to the listeners.”