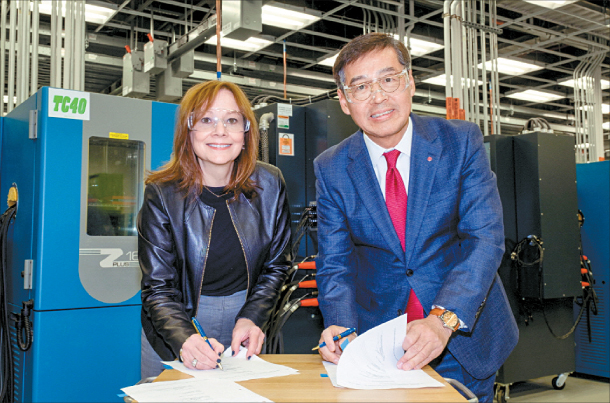 The two companies signed an agreement Thursday to establish a 50-50 joint venture for the project. The plant in Lordstown, Ohio will have an annual capacity of more than 30 gigawatt hours. Construction will start in mid-2020. When mass production begins was not disclosed.

This is LG’s first joint venture for EV batteries in the United States, a market that’s expected to grow at an annual rate of 26 percent between 2019 and 2023, according to Mirae Asset Daewoo’s research center.

Batteries produced in the Lordstown plant will be supplied to GM only. The factory serves both sides: The automotive company needed a stable battery supplier of assured quality while LG was looking for ways to expand its foothold in the rapidly growing market. Joining forces with GM enables it to do so while sharing costs and reducing risks by having a fixed customer.

According to GM, the two companies will also work together to develop and produce advanced batteries with the goal of reducing costs.

“Our joint venture with the No. 1 American automaker will further prepare us for the anticipated growth of the North American EV market, while giving us insights into the broader EV ecosystem,” said LG Chem Vice Chairman and CEO Shin Hak-cheol.

The relationship between the two goes back to 2009. LG Chem was the sole battery supplier for GM’s Chevrolet Volt, its first mass-produced EV released that year. The battery maker has supplied to GM since then, including for the Chevrolet Spark.

LG has an existing battery factory in Michigan, which was established in 2012. The Ohio plant will be the company’s second in the United States.

The United States is one of three key EV markets with China and Europe. With the partnership with GM, LG will operate seven EV battery cell factories - two through joint ventures with carmakers and five on their own - across these three regions and Korea. LG is the only Korean battery maker with such global reach.

LG Chem is Korea’s No. 1 EV battery maker and the world’s third largest as of September, according to SNE Research, an information provider specializing in renewable energy. Since 1998, LG has supplied batteries to 2.7 million EVs and has a 150 trillion won order backlog at the moment.