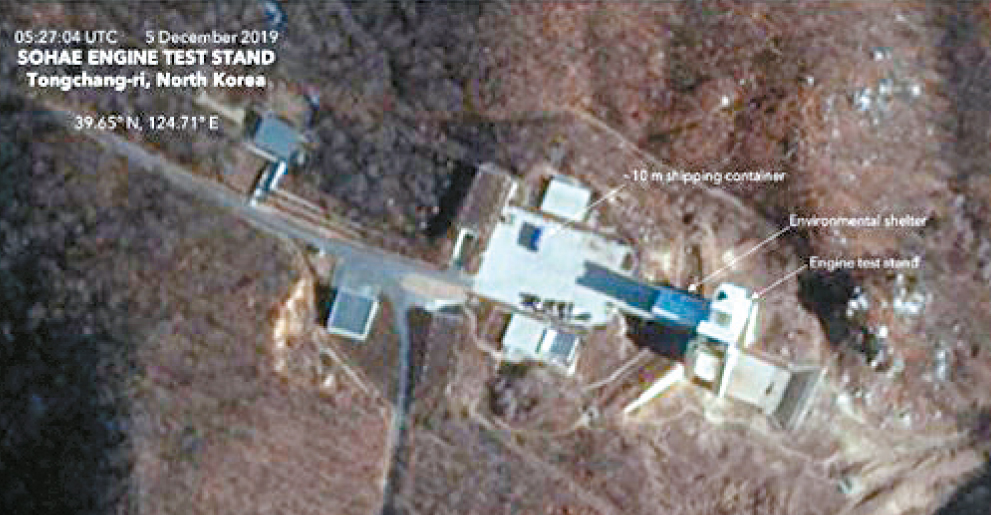 A satellite image provided by Planet Labs to the Middlebury Institute Thursday shows a large shipping container at a rocket launch site in North Korea. [SCREEN CAPTURE FROM CNN]

“We will respond with provocative language if such expressions are used again,” Choe was quoted as saying by the Korean Central News Agency on Thursday. “If the intention is to bring back the figures of speech used two years ago, we will take it as a grave challenge […] and diagnose it as yet another relapse of the dotage of a dotard.”

She was reacting to Trump’s recent use of the moniker he gave North Korean leader Kim Jong-un - “Rocket Man” - in their war of words in 2017, when tensions escalated before the two held a historic summit in Singapore in June 2018.

In a meeting with the press in London on Tuesday, Trump said, “[Kim] likes sending rockets up, doesn’t he? That’s why I call him Rocket Man.”

Trump was visiting the city for NATO’s 70th anniversary summit, hosted from Tuesday to Wednesday. In the press conference, Trump also said he was prepared to use military force against North Korea “if we have to.”

In her statement, Choe said Trump’s talk of using force against North Korea is “sending shocks to the international community and heightening anxiety,” adding, “What makes us really unhappy is the use of such figures of speech that shows a lack of respect toward us […] and at such a sensitive time as this.”

On Sept. 19, 2017, Trump said in a speech at the UN General Assembly, “Rocket Man is on a suicide mission for himself and for his regime,” to which Kim responded in a statement issued three days later, “I will surely and definitely tame the mentally deranged U.S. dotard with fire.”

The two engaged in exchanges of insults for months, with Kim even saying he had a “nuclear button” on his desk in a New Year’s speech on Jan. 1, 2018, to which Trump responded in a Tweet the following day, “I too have a Nuclear Button, but it is a much bigger & more powerful one than his, and my Button works!”

The recent tit-for-tat between North Korea and the United States comes at a testy time. Nuclear negotiations have been deadlocked for months, and Pyongyang is threatening to return to confrontation if no deal is reached by the year’s end.

Evidence suggests a long-range missile test - possibly involving an intercontinental ballistic missile - could indeed be in the works, according to satellite images of a launch site in North Korea.

A high-ranking South Korean official told the JoongAng Ilbo last week that Seoul had detected activities earlier in the year showing renovations to missile-related facilities in Tongchang-ri - a rocket launch site in North Pyongan Province that the regime tore down last year as a peacemaking gesture.

The official added that satellite images from Google Earth in November showed movements of trucks and buses at the site, a sign that the North may be conducting engine tests.

In a report by CNN on Friday, a satellite image provided by Planet Labs to the Middlebury Institute showed a large shipping container at the site, which was not seen there before Thursday. The institute said the North may be resuming engine tests.

“Looks like North Korea is going to resume rocket engine testing at Sohae [the site in Tongchang-ri],” said Jeffrey Lewis, director of the East Asia Nonproliferation Program at the Middlebury Institute, on his Twitter account Friday. “This isn’t the ‘Christmas gift’ the North Koreans have promised but it is a lump of coal in Trump’s stocking.”

North Korea’s most recent rocket launch was Nov. 28, when it fired two unidentified projectiles into the sea off its east coast from Yeonpo, South Hamgyong Province. It was the 13th time Pyongyang carried out a weapons test this year.

The United States dispatched on Friday a reconnaissance plane, an RC-135V, over the Korean Peninsula, according to Aircraft Spots, a Twitter account that tracks military aircraft worldwide.