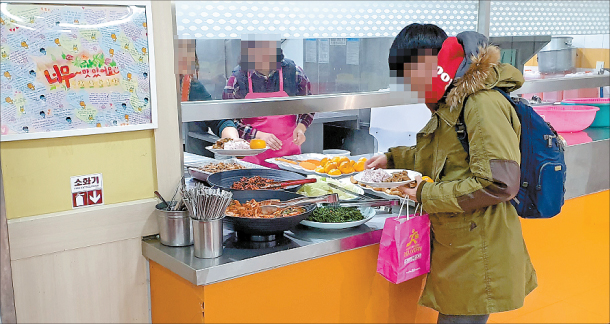 A young man receives free breakfast from the Seongbok Central Presbyterian Church in central Seoul at around 7 a.m. on Nov. 19. [PYUN GWANG-HYUN]

Twenty-three-year-old Kang Soo-min often opts for a samgak gimbap (triangle-shaped rice ball wrapped in seaweed) instead of a proper meal because it is all that he can afford. When he’s particularly tight for money, he’ll take some extra time deciding whether to get the cheapest variety priced at 800 won ($0.67) or shell out 1,200 won for the more expensive version.

Kang said it hurts him to hear people say that “young people will just get some fried chicken with youth allowance [a policy to provide monthly subsidies for unemployed young adults].”

The JoongAng Ilbo recently met a few young adults to hear their stories about why they are going hungry and how they deal with it.

“There was a time when I only ate two eggs a day,” a young student who wished to remain anonymous said. “Also, I bought five bananas that were close to their expiry date for 1,000 won to last a day.”

Another university student surnamed Hyeong said he doesn’t qualify for any subsidies from the government as he is not classified in the lowest income bracket.

“Since I need to pay rent and buy books, the easiest way to save money is not eating,” said a university student surnamed Park.

But it’s not just students who are facing food difficulties.

According to a survey conducted by job search website Job Korea and Albamon in 2017, of 1,147 young job seekers, 83.1 percent of them skip at least one meal each day. Of them, 42.3 percent cited being “heavily burdened by food expense” as the reason why they go hungry.

Park Chan-mi, 21, was born in Busan and came to Seoul to prepare for a public service exam to become a police officer.

Twenty-two-year-old Kim Dong-young said the Seongbok Central Presbyterian Church’s free meals allow him to save around 100,000 won a month.

And these meals really are free of charge or conditions. The churches don’t share the Gospels or force people to pray before eating.

“We made three rules: providing fruits and vegetables, including flavorful meat dishes at least twice a week and not sharing the Gospels,” said Pastor Kil Seong-un of the Seongbok Central Presbyterian Church.

“The deaconess of our church wakes up at 4 a.m. in the morning to prepare 200 servings for meals,” said Pastor Kim Sang-soon of the Kangnam Presbyterian Church.

While these churches provide an invaluable service to many, they cannot solve the much bigger problem of youth hunger. Some young people interviewed suggested “1,000-won meals in school cafeterias” or “scholarships for living expenses” as solutions for the issue.

“The government should lower the domestic market prices and monthly rent as well in order to allow us to eat with peace of mind,” said a 24-year-old university student surnamed Kim. “The cause of the problem comes from not only insufficient income but also the unstable labor market and a lack of time due to employment competition,” Lee Seung-yoon, a social welfare professor at Ewha Womans University, said. “We should take care of the youth more thoroughly and make sure they are enjoying their fundamental human rights.”