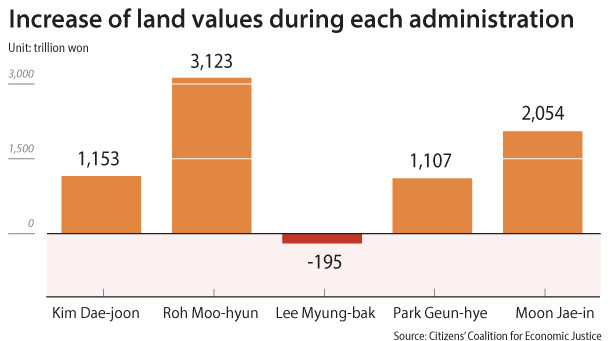 Land values have risen more than 2,000 trillion won ($1.68 trillion) over the past two years, the largest rise under any administration.

Last week, the Citizens’ Coalition for Economic Justice (CCEJ) and the office of the Party for Democracy and Peace lawmaker Chung Dong-young released a joint study that showed that during 2017 and 2018, land prices rose 2,054 trillion won in total value.

The study was based on government land-assessed values between 1979 and 2019, while reflecting the changes in market value.

The civic group said accounting for inflation, land owners have gained 1,988 trillion won of unearned income. Considering that 70 percent of the people in the country do not own land, each of 15 million landowners over the last two years made 130 million won as unearned income.

When narrowing down the scope to the top 1 percent, which owns 38 percent of the land in the country, in the last 2 years, each of these landowners have booked 4.9 billion won of unearned income, according to the civic group.

At the end of last year, the nation’s land value totaled 11,500 billion won. Of that, the land owned by the government is worth 2,055 trillion won, while land privately owned is valued at 9,489 trillion won.

The value of privately-owned land has increased 30 times since 1979, when the total was 325 trillion won.

The civic group said land prices have increased the sharpest under the Moon Jae-in government.

While the current administration adopted liberal real estate policies, including tighter comprehensive real estate taxes and capping preconstruction sale prices, the CCEJ believes that it has imposed regulations that overall drive up prices, especially in Seoul.

The government argued that the CCEJ’s ways of calculating the land value was wrong. The Ministry of Land, Infrastructure and Transport said, according to the official statistics released by the Bank of Korea, land assets on the peninsula as of the end of 2018 were valued at 8,222 trillion won, up 1,076 trillion won in the last two years, half of that claimed by CCEJ.

“CCEJ as a responsible civic organization should suggest a specific basis for their analysis,” said a ministry official.

The ministry challenged the CCEJ to hold a public discussion on the issue.