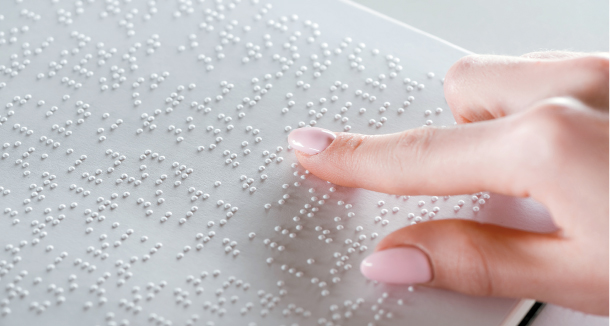 The advent of cutting-edge technology liberates a great number of people from everyday hassles.

Unmanned and automated kiosks at hamburger joints, for instance, free employees from having to take orders from customers. Instead, they could use that saved time on prepping vegetables in advance.

Some see the technology as a blessing, but others find it to be a disaster.

“Advanced technology may seem more convenient to those with physical disabilities, but in reality the technology doesn’t promise a better world all the time,” said Lee Byeong-don, the head at the Korea Disabled Consumers’ Union (KDCU).

“There are a myriad of digital products that you can operate with a few touches but they are useless for the visually impaired.

“The latest electric rice cooker from a local company boasts that it has 18 different functions and you can operate it with a single digital push button, but it is nothing for people like us,” Lee added.

Electronic devices loaded with artificial intelligence also may look handy for the blind, but most of the products are activated with voice only in the beginning and later require touch, causing blind users to eventually give up.

The list of similar inconveniences that the visually impaired experience daily goes on and on.

“Someone I know, a blind person, checked in at a hotel, and he later found out that he had dabbed shampoo on his face,” Lee said.

“We have very few products that provide braille labels in the market, so it’s never easy for blind people to tell the difference between similar products using only their sense of touch,” Lee added.

Everyday rituals such as going grocery shopping or placing an order at a restaurant are daunting tasks for the blind, too.

It comes as no surprise that the visually impaired often miss their turns without knowing that their numbers have flashed on screens in the facilities. Without personal assistants, many struggle to find ways to cope with the changes.

Lee from the KDCU shared one more anecdote.

“It’s not easy to buy a can of beer. All the canned beer has braille labels on the top, but it just reads beer. You have no idea what brand it is. You can’t really know whether it is a domestic beer or an imported one. They just sort out beverages into three: beer, fizzy and non-fizzy drink.”

Adding braille labels to more products has been a long-standing issue in politics.

The Braille Act came into effect in Korea in May 2017. Under the act, which was put in place for the purpose of enhancing the quality of life for the blind, 14 non-legally-binding recommendations were made.

Lawmaker Rep. Park Myung-jae from the former Saenuri Party proposed some revised bills that mandated braille labels on medicines, cosmetics and health foods in 2015. Similar bills were proposed by another lawmaker Rep. Yun So-ha from the Justice Party in 2017, but they did not pass the National Assembly.

“I proposed it for the sake of safety for the blind community, but I feel sorry that it is still pending,” said Yun.

Fortunately, however, more private companies and the public sector are becoming more aware of the issue. And many are approaching the issue as a matter of inclusive design. 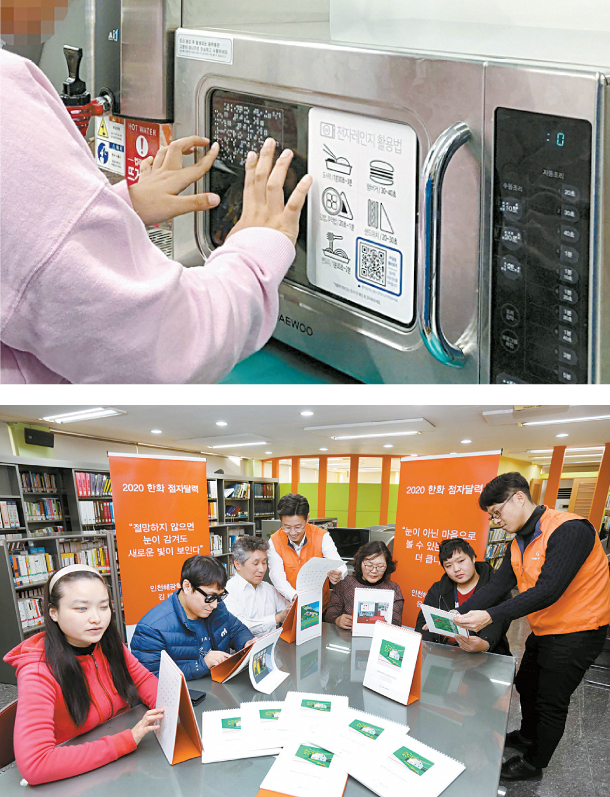 Top: Local convenience store chain GS25 made some branches friendly for those who are visually impaired. The way to use the microwave is explained in braille dots at one of its stores. Above: Hanwha Group has produced braille calendars for the past 20 years. [GS25, HANWHA GROUP]

Inclusive design caters to the needs of people of all abilities, from the disabled to seniors to children. It is called “design for all” in Northern Europe, while it is dubbed “universal design” in the United States and Japan.

Basic concepts are similar, but inclusive design goes further than universal design and focuses on everybody.

Regardless of age, gender and language, everyone should be able to use various products and have access to facilities and services without being excluded.

Low-floor buses without stairs or products with braille labels are examples of inclusive design.

Gongju, South Chungcheong, recently began to provide braille labels for some medicines. The braille stickers notify people of possible side effects that could be caused by specific drugs. The stickers also contain information of don’ts when taking certain medicines so that the blind can take drugs independently.

Private companies have joined the bandwagon as well.

The country’s beauty conglomerates Amorepacific and LG Household & Health Care have added braille dots to some of their products so that their customers can tell the difference between shower gels and shampoos.

The company added braille dots to all of its 18 product, not only on the package boxes, but also on the containers starting April.

“We try to elaborate on details depending on skin types so that consumers [who are visually impaired] can opt for suitable products depending on their needs,” said Lee Dong-won, the head of the Dr. Different.

“We don’t think of this as a one-time only event. We hope this would encourage other companies to join in,” he added.

Products that include braille labeling from top: a blouse, a Coca-Cola can and an air purifier. [HELLO MAL, JOONGANG ILBO]

Local coffee franchise Ediya Coffee started providing braille menus starting in October. Convenience store chain GS25 said in October that it will add more notifications written in braille dots at the 144 stores that are located within a 1-kilometer (0.62-mile) radius of facilities for the blind. Those facilities include community centers for the blind run by cities and local districts.

Detailed instructions on how to use microwaves and the location of trash bins are written in braille letters at the specific convenience store locations.

Hanwha Group has been producing braille calendars for 20 years and distributes them for free.

More innovative attempts are made by young entrepreneurs.

An Hye-jin, Kim Su-hyeon and Lee Mu-bi established the start-up Hello Mal and initiated an upcycle clothing project about a year ago.

They carried out a couple of projects such as a wedding gown rental service for single mothers and clothing reform education for children from low-income families. They eventually developed an interest in blind women who couldn’t choose what to wear without help from others.

“We used to donate clothes to associations for the blind and then we came to know about difficulties some blind people go through,” said An.

“They can buy some clothing with braille labels through international shopping, but they are way too expensive. A T-shirt costs 70,000 won ($58.70). That’s why we embarked on this project.”

There was some trial and error in the beginning.

“We attached the braille labels underneath the collar, but people who tried out our clothes said they could feel the braille dots on their skin and it was annoying. We eventually moved the dot labels from the neck to the hem of sleeves,” An added.

The volume of information included in the label was cut down, too.

Information about materials, colors and patterns were included on a single label in early stages.

“The braille dots are quite big so it was hard for us to put all the information on a label. In addition, most of the blind people have a good sense about fabrics and materials; they just know what clothes are made of just by touching it. We ended up adding information only about colors or patterns,” An said.

The efforts of Hello Mal was recently recognized by the Korea Central Council of Social Enterprise. The clothing with braille labels received the grand prize last month at the Social Economy Contest, an annual contest for start-ups which come up with products or services that come in handy for minorities.

Hello Mal plans to launch its clothing with braille labels early next year. The company said the price range will be between 15,000 won and 30,000 won for a single item.