Owners of the company

Owners of the company 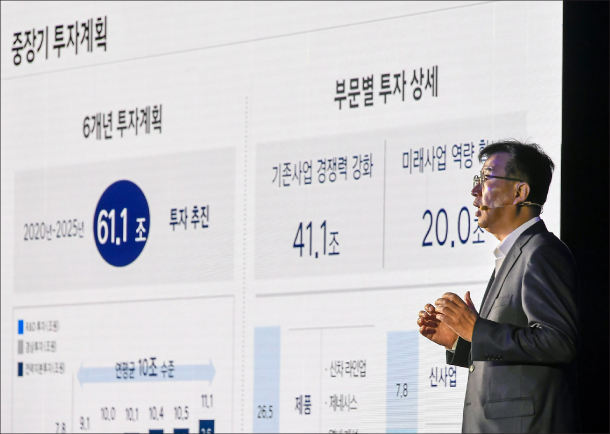 Lee Won-hee, president of Hyundai Motor, announces “2025 Strategies for Hyundai Motor Group” at a hotel in Seoul on what he called “CEO Investor Day” on Dec. 4. [HYUNDAI MOTOR GROUP]

It is the first time that the Hyundai Motor president has explained the company’s goals to investors. To help address shareholders’ concerns about the company’s investments, he offered a measure to boost the stock price by buying 300 billion won ($252.2 million) of company stocks. On the sophisticated future strategy presentation, an industry expert said that the company seems to have now realized that the shareholders are the owners of the company.

He mentioned the “extreme stakeholder capitalism.” He said that Korean companies have to care about countless “stakeholders” such as the Blue House, the Fair Trade Commission, government ministries and the labor union. However, after discord with an activist fund over the management structure reform last year, Hyundai Motor seems to have learned the lesson that shareholder support is the most important.
Hyundai Motor Group is to invest 61 trillion won by 2025 to prepare for the changes of the future. Hyundai Motor Group explained its detailed management plan to shareholders as a signal to trust the company for its readiness.

The problem is the unchanged stakeholders. While Japan’s Toyota, Germany’s Mercedes-Benz and BMW and GM are testing future mobility, Hyundai Motor remains decidedly limited in its experiments in the face of various regulations from the government.

Now is the time for the Blue House, the government and unions to display the virtue of symbiosis and work together as effective stakeholders in Korea Inc.

The author is the deputy head of the industry 1 team of the JoongAng Ilbo.