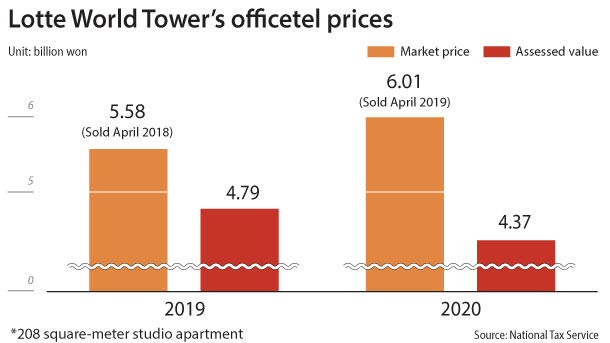 Officetels in Lotte World Tower will be assessed 6 percent lower in 2020 even though the average assessed value for all officetels will rise 1.36 percent.

A total of 749,221 officetels, which are studio apartments, were assessed, and the assessed value is 83 percent of the market value, up from 82 percent this year.

Lotte World Tower in Jamsil, Gangnam, in southern Seoul where the high-end officetel Signiel Residences are located on the 44th to 70th floor of the 555-meter (1,820-foot) skyscraper. [YONHAP]

The assessed value of Pie’n Polus, located in Cheongdam-dong, Gangnam, will rise 6.28 percent, the sharpest increase.

The Korea Appraisal Board, which conducted the assessment, said the lower value was largely because the officetel’s market value has declined due to low sales.

Despite being completed three years ago, only 30 percent of the officetels were sold, while some have been offered at a discount, the appraisal institution said.

The JoongAng Ilbo found that 40 percent of the officetels, or 80 units, have been sold so far, higher than the 30 percent claim by the Korea Appraisal Board.

On average, the actual market value of the officetels were between 6 billion and 7 billion won. A 3.3 square-meter area on average is valued at 70 million won.

The market value on the most expensive officetel in the skyscraper, which is a 489-square-meter studio that takes up the entire 68th floor, was 22 billion won. That’s 100 million won for each 3.3 square meters.

The most expensive apartment sold in Korea this year is at Hannam The Hill in Yongsan, central Seoul, where a 244-square-meter unit was sold at 8.4 billion won. This translates to 84 million won for every 3.3 square meters.

The rent on Lotte skyscraper officetels is high. So far, six tenants are renting the studio apartments.

The jeonse ,or long-term deposit, on a 247-square-meter apartment is 5.5 billion won, which is equivalent to 65 percent of the sale price.

The most expensive jeonse deposit for apartments this year is at the Sangji Ritzville Caelum 2 in Cheongdam-dong at 4.5 billion won for a 244-square-meter apartment.

The jeonse price on a 247-square-meter apartment in the neighboring Hyosung Villa was also 4.5 billion won.

The most expensive rent for a Lotte Tower officetel is 21.3 million won.