Out of the courtroom and into the boardroom

Out of the courtroom and into the boardroom 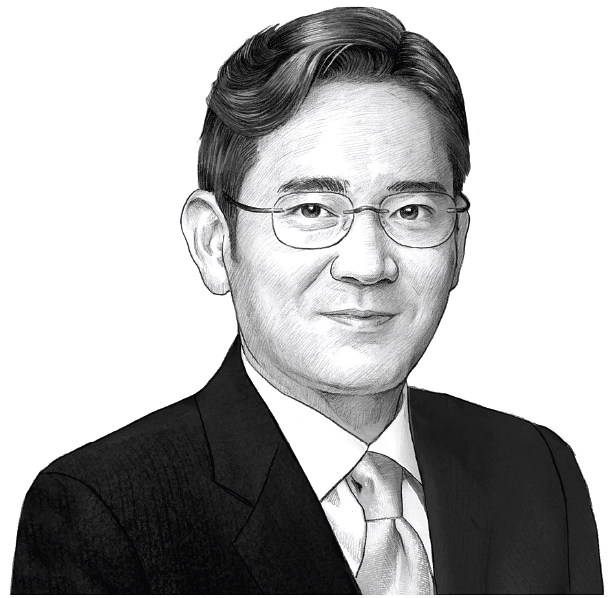 Lee may have been charged with bribery, but the successive court appearances also gave some insight into how the man in charge of Samsung envisions the future of one of the world’s largest conglomerates.

In 1993 at 51 years of age, Lee’s father and the conglomerate’s former Chairman Lee Kun-hee announced the “Frankfurt Declaration” which marked the start of a new management initiative to push for drastic innovation to overcome crisis.

Standing in a series of Seoul courtrooms embroiled in a national corruption scandal, 51-year-old Lee Jae-yong ended up giving his own declaration as well.

Lee came closest to his own take on his father’s Frankfurt Declaration in a statement made in an appeals court on February 2018.

“I was born a third-generation chaebol leader, but I wanted to make Samsung stronger, to add value to it with my own skills and efforts,” he said.

“I wanted to be recognized as the leader of a world-leading company, not as the grandson of [Samsung Group Founder] Lee Byung-chul or the son of Lee Kun-hee, but as an entrepreneur in my own right that can stand shoulder to shoulder with my predecessors.”

Lee took the helm as the group’s de facto leader in May 2014, after his father suffered a heart attack that left him bedridden. He has not been seen in public since then.

Lee’s leadership was crippled in 2017, when he was imprisoned for a year for bribing the former president and her confidante Choi Soon-sil. Since his release in February 2018, he has been slowly increasing his presence.

But if you look back to the days before Lee’s brief downfall, his management style becomes much more visible.

Why sell a money-making firm?

In November 2014, just six months after Lee took control, Samsung sold off Samsung Techwin and Samsung Thales, both defense manufacturers, to Hanwha Group. The following year, the conglomerate sold all of its chemical subsidiaries to Lotte Group.

There was opposition from inside the group, but Lee was firm on the need to concentrate on industries where Samsung had confidence and passion. The sell-offs left Samsung with 4.9 trillion won ($4.1 billion) and a simpler business structure focused on electronics, finance and biopharmaceuticals.

Lee’s next step was to develop future growth engines. In 2016, he built Samsung Research America (SRA) in Silicon Valley. This distant outpost embodied Lee’s vision for the future of Samsung.

Through the SRA, Samsung acquired Harman International, a U.S. audio company, for $8 billion in November 2016, the largest acquisition deal ever made by a Korean company. The center also hired renowned figures in Silicon Valley such as Professor Sebastian Seung of Princeton University’s Neuroscience Institute and Larry Heck, who led research and development for the Google Assistant.

Today, the SRA still functions as a strategic base camp for Samsung’s four new businesses and its 2030 vision for logic semiconductors.

“The business restructuring and launch of the SRA as the main gate to obtain new technology are hints of the future Lee is drawing for Samsung,” said Song Jae-yong, a business professor at Seoul National University who wrote the book “Samsung Way” based on his experience as an adviser to the company. “While enhancing the company’s existing strength in manufacturing, they are moves that show intentions to obtain new technology for the next 10 to 20 years through aggressive mergers and acquisitions.”

Lee was not present at Samsung Electronics’ 50th anniversary event held on Nov. 1 at the company’s headquarters in Suwon, Gyeonggi. Instead, he sent a video message.

“Our journey in the past 50 years was possible thanks to your devotion and effort,” Lee said. “For the next 50 years, let’s continue to dream and imagine,” he added, while emphasizing that the company’s future depends on just how far ahead its employees are able to envision. 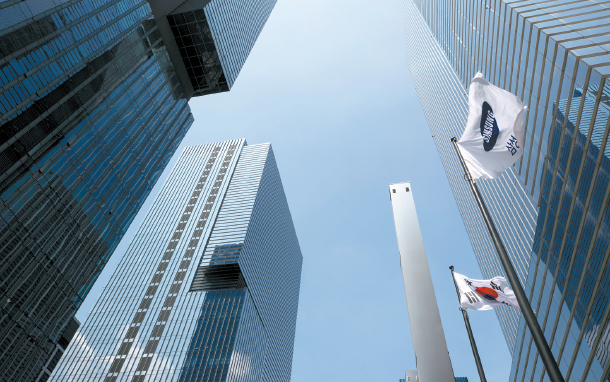 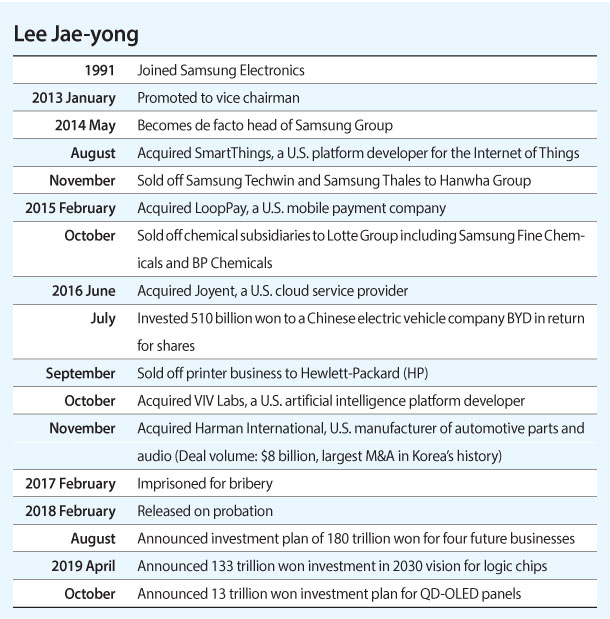 “The path to being the world’s greatest is to share and grow, hand in hand.”

The tone was different from Lee Kun-hee, who consistently used the word “crisis” in internal speeches. Yet despite the change in rhetoric, Samsung is probably closer to crisis now than it was at any point under the elder Lee.

The biggest reason is the uncertainty surrounding Lee Jae-yong, the first Samsung leader to go to prison.

A new round of trials started in October after the Supreme Court ordered a lower court to reconsider suspending his sentence. The result of that case is uncertain. On top of that, Samsung still has the issue of a complicated business structure riddled with cross-shareholding, not to mention a prosecutor investigation going on into the Lee family’s management succession.

The macroeconomic environment is also not helping. Over the past 28 years, Samsung Electronics has been a world leader in memory chips - an industry where price fluctuations are frequent.

As a big part of the company’s business portfolio depends on this division, Samsung saw operating profits plummet this year. Furthermore, memory only accounts for 30 percent of the entire semiconductor market, but the company’s presence in the remaining 70 percent is still minimal.

With IT giants like Huawei in the lead, Chinese competitors are catching up fast. Although it could have been worse, the issue of Japan’s export restrictions on high-tech IT materials for chips and displays are not completely resolved either.

Another big concern is Samsung’s changing reputation. In the past, Samsung did well by quickly adopting emerging technology as it became mainstream. To have a chance of competing with IT companies like Google, Amazon and Apple, Samsung needs to transition from being a quick adopter to an innovator. So far, in emerging markets like artificial intelligence (AI) and automotive cars, Samsung falls well behind other global players.

In April, Lee announced a 2030 vision to become a global leader in logic chips. This is directly linked to the company’s four future growth engines pinpointed in August 2018 - AI, 5G, biopharmaceuticals and electric components for future cars.

The semiconductor vision will take up 133 trillion won in investments by 2030, while the four future growth engines will be allocated with 180 trillion won. Both sums of money are on a scale that cannot be decided by anyone other than the owner. The fate of these projects may well determine how successful Lee’s leadership is.

“Our bet will be on self-driving cars, AI, 5G and non-memory chips,” he told them. “We should focus assets to become the global No. 1 in non-memory.”

Around 10 days later on Jan. 15, the Blue House organized a meeting between President Moon Jae-in and corporate leaders. When Moon asked Lee about the current semiconductor market, Lee replied “It’s not great, but our real skills will show soon.”

At the moment, Intel dominates the central processing unit, or CPU, market for PC and data centers. The application processor (AP) market for smartphones is led by Qualcomm, while Sony heads the image sensor market. Each company has a firm grip in its respective fields, but none dominate across multiple sectors.

“Samsung’s goal is not in the present - we want to grab leadership in the future markets of autonomous cars, artificial intelligence, 5G and non-memory chips for mobile telecommunications,” said a Samsung Electronics source. “Competition with current leaders may be inevitable, but our direction is to open new markets.”

The fight will be a long one.

“Samsung will need a long-term investment plan of more than 10 years in architecture, patents and training workforce to see results in non-memory chips, even if it doesn’t generate cash immediately,” said Chang Sea-jin, writer of the book “Sony vs Samsung” and a business professor at KAIST and the National University of Singapore.

“Decision-making for issues occurring in different business divisions should be completely handed over to the respective CEOs. Only after that can Lee devote himself to long-term investment and future planning.” 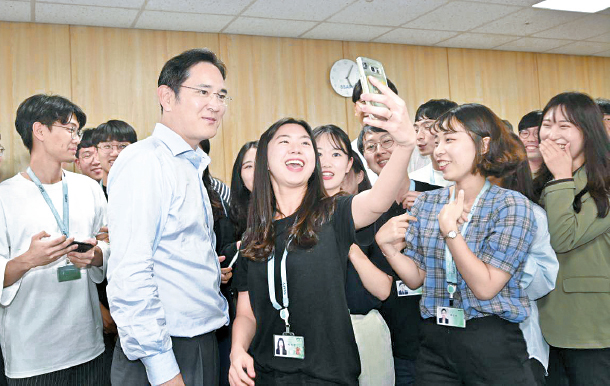 Smartphones typically have one AP, but self-driving cars need at least three. Samsung’s primary goal is to grab leadership in the logic chip market as demand increases with the rise of self-driving cars, 5G and AI technology. The second goal is to collect data through the cloud from smartphones, cars and electronics, analyze it and offer related services.

If this goes as planned, a possible scenario is competition between companies like Google and Amazon, who have data but no chip sets, versus Samsung, who has chip sets and wants data.

“The strength of IT giants like Google, Facebook and Apple is that they have technology, a clear future vision and good instincts all at once,” said Kim Sei-wan, an economics professor at Ewha Womans University. “A core factor is how successfully Lee and the Samsung CEOs pull out their instincts and vision.”

“Tech innovation has to happen in a way that can benefit society and the future of mankind. Sharing and growing hand in hand is the path to being the world’s best,” said Lee Jae-yong in that 50th anniversary message. For Samsung, “mutual growth” has become a keyword as important as becoming a first mover. After Lee took power, several old scandals involving Samsung were resolved.

One example is the company’s apology to the families of leukemia victims who fell ill after working in its factories. Along with an official apology, Samsung donated 50 billion won to a fund aimed to increase safety in industrial fields.

Under an agreement with its after sales technician labor union, Samsung Electronics directly hired 8,700 people, rather than using a third-party agency. Although the volume remains small, three labor unions have now been established at Samsung. This ended the group’s old “zero labor union” principle.

“The resolution of issues like the leukemia dispute after Lee’s rise to power is progress,” said Samsung critic Park Sang-in, a professor of public administration at Seoul National University. “But the company still falls short of global standards in terms of the work environment or guarantee of labor union activism.”

After Lee took over, Samsung started pushing efforts to change the culture inside the organization. One example is Lee’s announcement of the “Start-up Samsung Culture Revolution.”

There are three principles under this initiative: getting rid of old, outdated ways of thinking, stopping traditional but unreasonable methods and creating a working culture fit for a global company.

Changes were also made to human resources policies to reduce the number of ranks in the company from five to four, and by telling staff to refer to each other by names rather than titles. The shifts were prompted by Lee’s remark that Samsung’s old authoritative culture would not be able to foster innovation.

Lee got rid of his private jet and has been traveling alongside employees on business trips - an effort to break the rules of authority. Inside the company, there are still critical voices that say the rigid culture of absolute seniority remains.

Today’s Samsung still has a lot to do to become the truly global company it wants to be.

“The company is now experiencing a conflict between new generations and its old culture” said Professor Kim Sei-wan. “Resolving this will be a big task.”