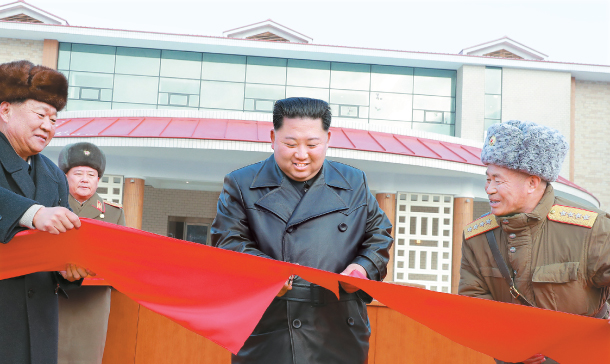 North Korean leader Kim Jong-un, center, cuts a ribbon at a ceremony celebrating the completion of the Yangdok spa resort in South Pyongan Province in an undated photo released by the North’s official Korean Central News Agency (KCNA) on Sunday. On the same day, Pyongyang announced that it had carried out a very important test at its Tongchang-ri missile engine test site in North Pyongan Province on Saturday. [YONHAP]

North Korea announced Sunday it conducted a “very important” test from a missile station Saturday that it claimed will change the country’s strategic position “in the near future.”

The test, announced by a spokesman for the North’s Academy of National Defense Science, the institution responsible for its missile program, may involve the motor for a long-range missile, possibly an intercontinental ballistic missile (ICBM).

For days, South Korean and American officials and experts had warned of possible missile-related activities at the Sohae Satellite Launching Ground at Tongchang-ri, North Pyongan Province, citing an increase in the movement of vehicles in the area.

The North has a history of testing the thrust power of an engine prior to a long-range missile test. In March 2017, the regime conducted a rocket motor test before test launching its first ICBM - the Hwasong-14 - in July that year. North Korean leader Kim Jong-un personally supervised that test. 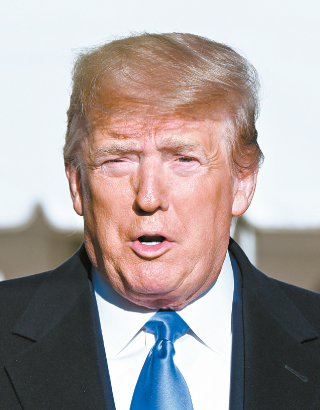 According to the spokesman, the Academy of National Defense Science reported the “successful result” of Saturday’s test to the Central Committee of the North’s Workers’ Party, which is scheduled to hold a plenary meeting later this month.

“The results of the recent important test will have an important effect on changing the strategic position of the DPRK once again in the near future,” the statement read, using the acronym for North Korea’s official name, the Democratic People’s Republic of Korea.

No further details on the test were provided.

While Pyongyang had declared for weeks it would take drastic action if its year-end deadline for denuclearization negotiations was not met - with a Foreign Ministry official ominously claiming a “Christmas gift” was in store for U.S. President Donald Trump - the test at Sohae could represent a major escalation that may see the regime conducting an ICBM test later this month.

On Saturday, North Korea’s ambassador to the United Nations Kim Song said denuclearization was off the negotiation table and that lengthy talks were no longer necessary with the United States.

Accusing Washington of using bilateral dialogue as a “time-saving trick” to exploit the negotiations for domestic political purposes, Kim Song’s statement to the foreign press appeared to be the strongest message to come out of Pyongyang yet, signaling that the regime may abandon talks altogether if the United States does not back down from its sanctions.

The reference to a domestic political agenda in Kim Song’s statement is believed to refer to Trump’s presidential re-election bid for 2020, an event that Pyongyang has been trying to exploit to gain leverage in nuclear negotiations.

At the White House on Saturday, Trump acknowledged the North’s interest in the election but appeared to downplay tensions in the relationship, saying he would “be surprised if North Korea acted hostilely.”

“[Kim] knows I have an election coming up,” Trump said. “But I really don’t think he wants to interfere with the election. I think he’d like to see something happen. The relationship is very good, but you know, there is certain hostility, there’s no question about it.”

These remarks from a president known for emotional charges against opponents were notably tame, even after the North turned up the aggression in its rhetoric against Trump last week.

In response to Trump’s use of the term “Rocket Man” to refer to Kim, Pyongyang’s Vice Foreign Minister Choe Son-hui warned that to bring back the figures of speech used when tensions were at a high between the two countries in 2017 represented “a grave challenge” and “the relapse of the dotage of a dotard.”

By announcing its test at the Sohae launch site, North Korea may be suggesting it intends to back up its threats by reneging on its self-imposed moratorium on nuclear and long-range missile tests - the “new path” that Kim had warned his regime may take if diplomacy fails.

North Korea last year publicly dismantled a rocket launch stand at the Sohae Satellite Launching Station to underscore its commitment to denuclearization but began reconstruction following the collapse of the second U.S.-North Korea summit at Hanoi, Vietnam, in February.

According to Prof. Kim Dong-yub, a professor of North Korean studies at Kyungnam University’s Institute of Far Eastern Studies in South Korea, Saturday’s test may have been part of an effort by the North to upgrade the motors of its Hwasong-14 and 15 ICBM rockets from liquid to solid-fuel propulsion systems.

“Given that the Academy of National Defense Science said the test will have an important effect to change the country’s strategic position, [the test] likely was the first test of a solid-fuel engine for an ICBM,” he said.

Solid-fuel propellants are lighter and less detectable than liquid-fuel variants and therefore have been a key target in North Korea’s ambitions to build an ICBM capable of reaching the U.S. mainland. The solid-fuel engines the regime has successfully developed so far are believed to only be capable of flying 2,000 to 3,000 kilometers (1,243 to 1,864 miles), but many experts say the regime’s already advanced missile program shows it is very close to developing solid propellants for ICBMs.