South Korean President Moon Jae-in and U.S. President Donald Trump talked over the phone on Saturday morning for about half an hour to discuss North Korea and peninsula affairs, the Blue House said, in what some local government officials predicted to be a sign that Washington is reaching out to Seoul for assistance in breaking the denuclearization logjam.

The Blue House said the phone call, which lasted for about 30 minutes from 11 a.m. Saturday, Seoul time, was initiated by Trump. 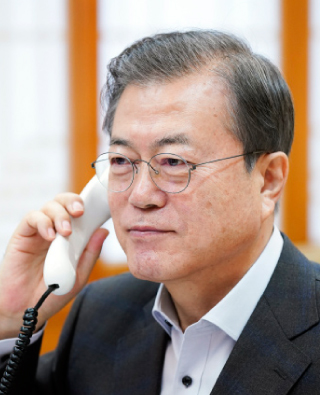 It was the first time Moon and Trump have spoken to each other one-on-one since Sept. 24, when they held a summit in New York on the sidelines of the United Nations General Assembly. Their last phone call was on May 8.

Blue House spokesperson Ko Min-jung said Saturday afternoon in a press briefing that both leaders talked “deeply” about ways to bring about progress in the Korean Peninsula peace process and agreed that the current situation on the peninsula was “severe.”

Ko stressed that Moon and Trump also agreed that the “dialogue momentum must maintain” between the United States and North Korea in order to reach “an early achievement” in the denuclearization talks, adding that both leaders concurred with each other to “talk over the phone anytime when necessary.”

A Blue House official said Moon and Trump did not discuss anything other than the North Korean denuclearization issue, such as the South Korea-Japan intelligence-sharing pact or the cost-sharing negotiations between South Korea and the United States.

The phone call apparently occurred before the “very important test” that Pyongyang claimed on Sunday to have carried out the previous day afternoon.

As Washington and Pyongyang recently resumed their war of words and North Korea’s self-imposed year-end deadline for a change in the United States’ denuclearization stance nears, a South Korean government official said Trump might have called Moon to ask for help in resolving the nuclear crisis.

“I’ve come to learn that North Korea and the United States aren’t talking to each other these days,” the official said Saturday on the condition of anonymity. “I think the United States is hoping South Korea will play some kind of a role using its information on the North.”

Yet even if that’s the case, analysts believe it won’t be easy for Seoul to play the middleman as it did last year, given that the North is ignoring all face-to-face dialogue requests from the South and insisting on talking directly with the United States on the subject of denuclearization.

After North Korean leader Kim Jong-un ordered all South Korean facilities on the Mount Kumgang tour resort to be scrapped in October, Pyongyang reached out to Seoul to discuss the issue through the exchange of paper documents.

Seoul made a counter proposal asking for both Koreas to hold face-to-face conversations, but the suggestion was turned down.