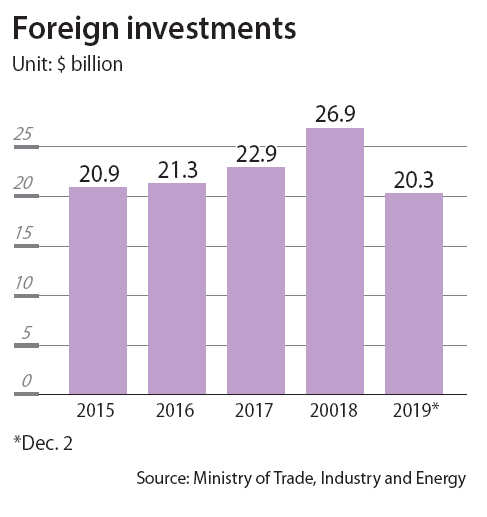 Foreign investment in Korea topped the $20-billion mark for the fifth consecutive year but slumped about 24 percent compared to last year.

According to the Ministry of Trade, Industry and Energy, foreign investment for 2019 amounted to $20.3 billion as of Dec. 2.

The ministry said foreign investors retain confidence in the Korean market even under such difficult circumstances as a trade war between the United States and China, Japan’s restrictions on exports to Korea, Brexit and growing protectionism in the global market.

The ministry particularly noted that global foreign direct investment shrunk in 2018 for the third consecutive year to $1.3 trillion and was its lowest level in a decade.

The government credited the sophistication of Korean industries including technology-driven new industries and a new focus on the development of materials, parts and equipment since Japan started restricting the exports of key components necessary to make semiconductor chips and displays. It also cited the increasing demand overseas for high-end Korean consumer goods including beauty and cosmetics goods and food products thanks to the Hallyu or Korean Wave of pop cultural content.

The government said investment flagged in the first half but started to recover from the third quarter.

In the first quarter of this year, foreign investment shrunk 35.7 percent compared to the same period a year earlier, and in the second quarter it further retreated, falling 38.1 percent.

But in the third quarter it bounced back, increasing 4.7 percent year-on-year.

“We were able to achieve $20 billion in investment after large investment projects rolled in particularly in the fourth quarter,” said a ministry official.

One such major investment was made last month. American semiconductor equipment manufacturer Lam Research announced it was investing $140 million in setting up a semiconductor research and development center in Yongin.

In November, Belgium fuel cell manufacturer Umicore announced it was investing $100 million in expanding its production facility in South Chungcheong.

“We were able to achieve $20 billion in foreign investment for five consecutive years as the [central] government, local governments and related institutions have worked as one team,” said Jung Dae-jin, director-general of cross-border investment policy at the ministry.

He added that the government will continue to try to attract investments before the end of the year, focusing on new areas such as the so-called hydrogen economy.