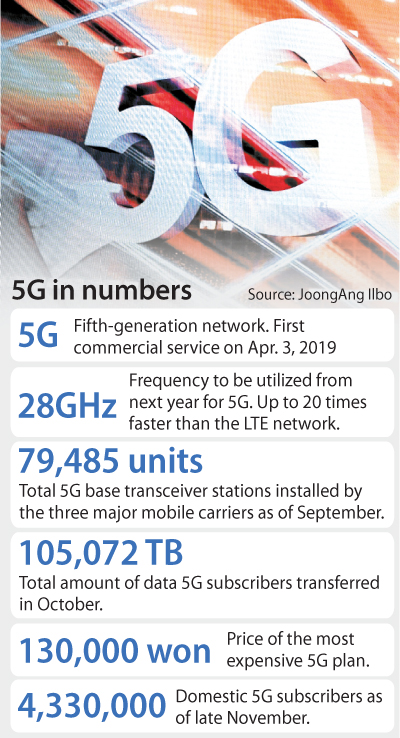 One year has passed since the three major telecommunications companies in Korea switched on their 5G networks on Dec. 1, 2018, and seven months have passed since commercial 5G services were first offered by them. On April 3, they began to make the high-speed network available to the public in Seoul, two days ahead of schedule.

This year has been a good one for 5G in Korea, but challenges remain.

The network had a total of 4.33 million subscribers as of November, according to the Korea Telecommunications Operators Association. At this rate, one-tenth of all subscribers in Korea will be using 5G by early next year.

To get to where we are today, and to build up the user base, the carriers have been luring subscribers with dramatic support and rebates, even giving away 5G cellphones for free.

Prices remain high, and this has been the source of some criticism. Plans are costing as much as 130,000 won ($109) a month. Added to this is the lack of base stations and exclusive content for 5G subscribers.

The Super Platinum plan, from LG U+, the 5GX Platinum of SK Telecom and SuperPlan Premium of KT cost 115,000, 125,000 and 130,000 won a month, respectively. On top of all that, the supposedly “unlimited” data plans from LG U+ and KT were not really unlimited. If subscribers transfer more than about 50 gigabytes of data two days in a row, the carriers reserved the right to place restrictions on the accounts. After this was noted by the public, and following some market outrage, the clauses allowing the companies to throttle these accounts were removed from contracts.

Speed is another issue. Korea’s 5G is currently only four times faster than the LTE network. It will be up to 20 times faster next year when another frequency is utilized, but there’s a wrinkle. Phone sold now won’t be able to utilize that frequency.

Aside from the nitty-gritty issues, the business is flourishing, with Samsung Electronics at the No. 1 spot for 5G handsets globally and the No. 2 spot for network equipment.

According to market researcher IHS Markit, Samsung Electronics was ranked second in the third quarter in terms of 5G network equipment sales.

Despite the headline numbers, the reality on the ground has been somewhat more complicated. 5G signals do not effectively reach subscribers who are indoors or in subways. The slow pace of transceiver base station construction in rural areas added fuel to the complaints that rural areas are being neglected.

According to data from Noh Woong-rae, chairman of the Science, ICT, Broadcasting and Communication Committee of the National Assembly - received from Central Radio Management Service - the three major mobile carriers built 79,485 5G base transceiver stations in the country as of September. However, 55.8 percent of them were concentrated in metropolitan areas.

5G data usage is exploding. According to Ministry of Science and ICT, data used by 5G subscribers was 105,072 terabytes per month, or 27,666 megabytes per user. The number is three times higher than an average LTE user, at 9,898 megabytes per month.

Content for 5G subscribers remains insufficient, while for those who want to take advantage of 5G’s best offerings, which are augmented reality- and virtual reality-based, additional equipment is needed, such as a head-mounted display, as well as a special pricing plan.

Investments are being made to narrow the content gap. SK Telecom recently introduced Virtual Social World, which it aims to take to the North American market next year. KT introduced Super VR TV, where users can enjoy IPTV content with a VR device, while LG U+ announced that it will invest 2.6 trillion won over the next five years into 5G content.

The government is eager to provide support for 5G business.

“The government will provide support to pioneer and expand a new 5G-based industry by increasing this year’s government budget for 5G by 87 percent,” said Science and Technology Minister Choi Ki-young.