PET bottles will have to be clear

PET bottles will have to be clear 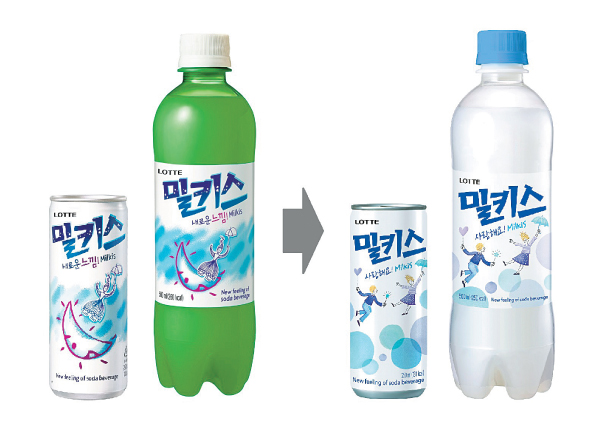 Before, left, and after, right, Lotte Chilsung Beverage removes color from the bottle used for its Milkis soda. [LOTTE CHILSUNG BEVERAGE]

Beverage makers are scrambling to upgrade their packaging ahead of a deadline requiring more environmentally-friendly bottles.

From Dec. 25, the companies will no longer be able to use colored polyethylene terephthalate (PET) bottles as relevant legislation goes into effect. Under the law, only color-free bottles will be allowed, and labels will have to be easily removable.

Companies will have to make the change within a grace period that will last up to three years.

Since the revision to the law was announced last year, companies have been working to get into compliance.

Lotte still hasn’t changed the PET for its Chilsung Cider bottles, but it is working to meet the Dec. 25 deadline.

“We plan to switch the PET of Chilsung Cider [bottles] before the revised legislation takes effect, but as it is one of Lotte’s best known drinks, we are considering the change more carefully,” said a spokesperson for Lotte Chilsung Beverage. “The green bottle is related to our identity and delivering the feeling of refreshment. We’re trying to come up with a design for the label that can best reflect the drink’s original identity.”

The spokesperson added he hopes that the growing trend toward becoming eco-friendly will help the company maintain sales after the change is made to the bottles.

Beer manufacturers could be greatly affected by the change, as brown PET bottles are important for them. Sunlight is bad for the quality of beer, so using clear PET could affect the beverage. The Environment Ministry and beer manufacturers are jointly conducting research to find out what materials could replace the brown bottle.

“If the government bans the use of colored PET, we would have to stop selling beer in PET bottles,” said a spokesperson for Hite Jinro.

That isn’t expected to affect market share much, since its rivals will be facing the same problem, but it could narrow consumer choice.

“Beers [in PET bottles] enable drinkers to drink beer at more affordable prices. Removing them from the market could limit consumer choice,” the spokesperson added.

The upcoming revision is set to affect the cosmetics industry because companies with sales exceeding 1 billion won ($897,000) and that annually release more than 4 tons of packaging will be required to mark how easily their packaging can be recycled.

This could put cosmetics companies in a difficult position, since colorful and fancy packaging is often used in marketing. Packaging also plays a functional role in maintaining the quality of certain products. An oil product from Amorepacific which contains vitamin C is packaged in a brown bottle to limit the exposure to the sun.

Since the Environment Ministry is giving companies a nine-month grace period to make the change, cosmetics firms are taking their time. A spokesperson from Amorepacific said the company hasn’t yet concluded how it will change the packaging of its products. LG Household & Health Care, which sells The History of Whoo, said it is “too early to announce how we will change the packaging.”

“It’s the global trend to use easily disposable packaging,” said a spokesperson for the Ministry of Environment. “Though there is some controversy on how the revision will affect cosmetics marketing, the ministry plans to offer exceptions for some products in terms of not having to mark for the level of disposability.”

The Environment Ministry on Monday announced it signed a voluntary agreement with 43 companies from seven industries, including construction, nonferrous metal and cement, to work on reducing fine dust. The agreement was made amid concerns about the air quality.

The annual amount of air pollutants created by firms from the six industries, excluding construction, was 170,000 tons last year.